After the fantastic opening for Shang-Chi and the Legend of the Ten Rings last weekend, our model is expecting a September slump at the box office this time around, with three new high-profile releases not doing enough to make up for a big drop for the Marvel superhero movie in its second weekend. The market’s best hope lies with Malignant, the supernatural horror movie from James Wan, but it’ll take a miracle to see anything like the overall business we saw over Labor Day weekend, and Shang-Chi is very unlikely to be unseated at the top of the chart. 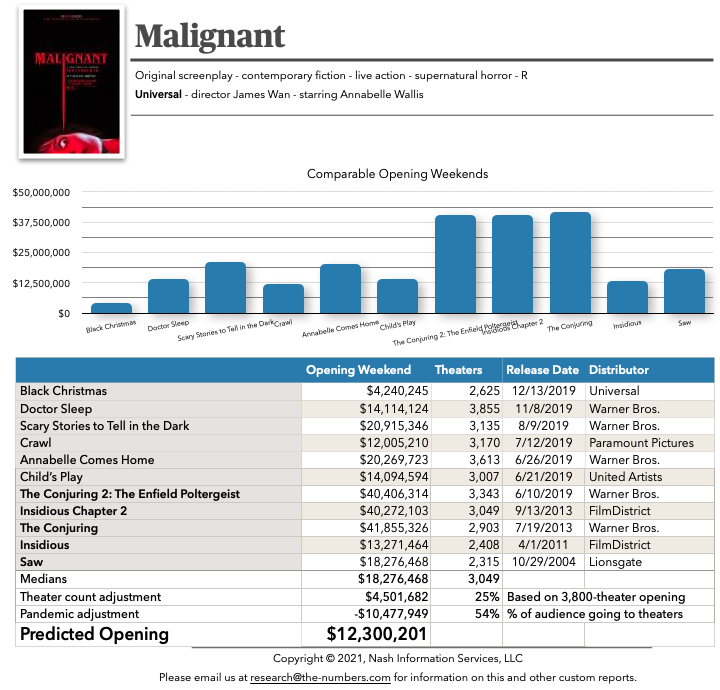 James Wan is without question one of the most successful directors in the film business at the moment, and Malignant is a return to the horror genre, where he made his name with films like Saw, Insidious and The Conjuring. His three most recent horror movies (highlighted in the list above) have opened with around $40 million, but two of them were sequels. Even with a substantial opening in 3,800 theaters, the model thinks an opening weekend around $23 million would be in line with expectations under normal circumstances, which translates into $12.3 million under current conditions.

There is some potential upside. Warner Bros. have leaned heavily into Wan’s connection to film in its marketing and the director has a substantial following. But the film is also debuting on HBO Max, and hasn’t been screened for critics, which is usually a bad sign. Anything over $10 million is probably “good enough” so far as the studio is concerned, particularly after its recent relative misfires. 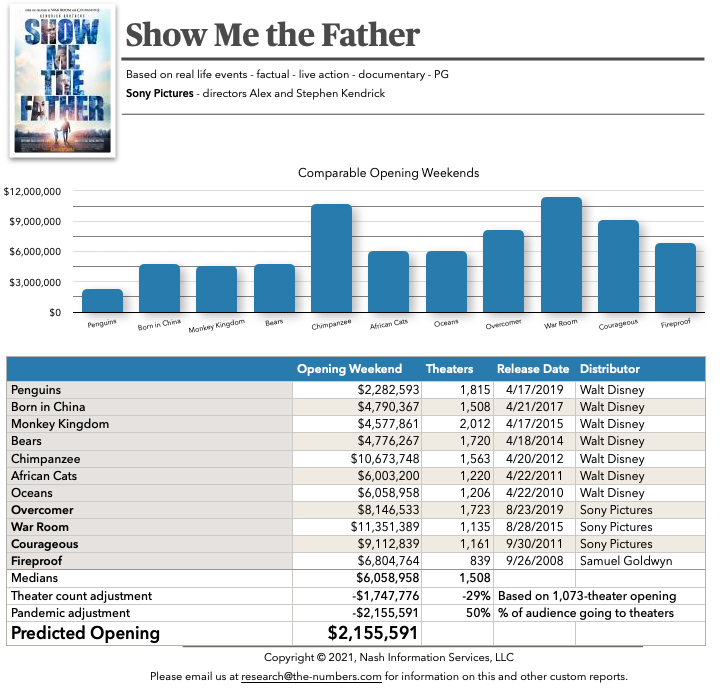 At the other end of the creative spectrum to Malignant lies Show Me the Father a faith-based documentary from Alex and Stephen Kendrick. The Kendrick brothers have a great track record, particularly given how low budget their films are, but this is their first venture into the documentary space. That presents a challenge for the model, and makes the prediction fairly speculative. The model settled on a combination of the brothers’ previous films and family-friendly, studio-released documentaries (Disneynature documentaries to be precise).

Given how unusual this film is compared to other pandemic-era wide releases, the range of uncertainty in the prediction is especially high. $2.16 million seems like a reasonable figure to me, but half or twice that amount wouldn’t surprise me. It’s certainly worth keeping an eye on though, since the faith-based audience may be more willing to go to theaters than the average moviegoers, particularly if they’ve been attending church regularly during the pandemic. From the perspective of learning more about the health of the market, this is a timely release. 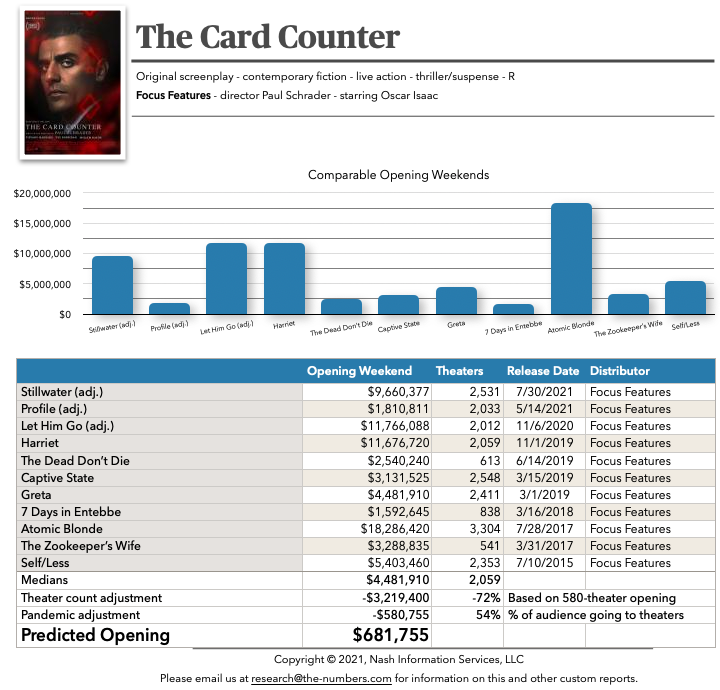 The Card Counter is another film that looks hard to predict. Focus Features have released three films during the pandemic that are broadly similar to this one, and I’ve included them in the analysis above. The model uses the opening weekend for those films adjusted for the health of the market when they were released—i.e., their weekend numbers in the table above are higher than what they actually opened with.

Focus is quite strategic in deciding how many theaters to release a film in, and is apparently hoping for good word of mouth to propel The Card Counter to larger numbers of theaters over the next few weeks. At least, that’s one interpretation of the film opening in 580 locations. Another is that the studio thinks it’s aimed at too old an audience to succeed in theaters right now, but is building interest for the home market release. Either way, the model doesn’t think it’ll make a huge splash at the box office this weekend. If it tops $1 million, it could pick up a few more locations, and that’s probably a good target for this one. 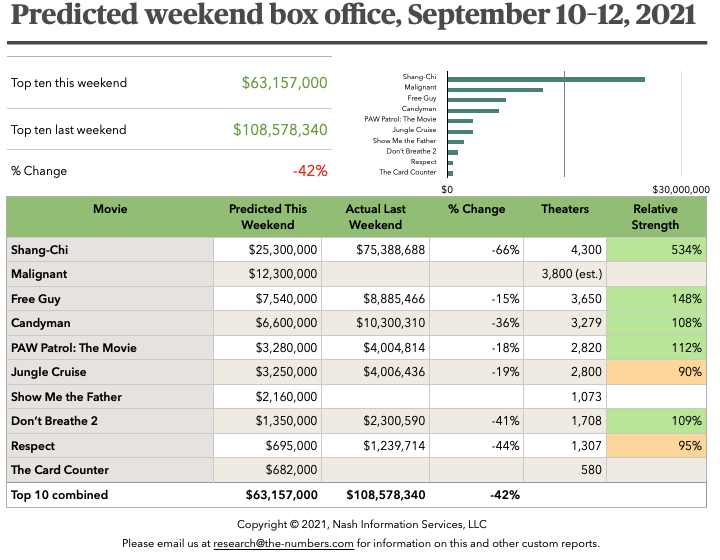 Unless Malignant does something really surprising, Shang-Chi should easily win the weekend. The model thinks it’ll fall 66% from last weekend, which would be sharp by pandemic standards. That’s because there’s been a tendency for really big releases to fall quite sharply in their second weekend—essentially, “the faster they rise, the quicker they fall.” Maybe Shang-Chi’s theatrical exclusivity will keep that drop to more like 50% and it’ll top $30 million this weekend. That would be a welcome boost to the market as a whole, but we’re still looking at a substantial drop from last weekend’s $100-million-plus weekend.