One of this weekend’s two new wide releases will have to do much, much better than expected to challenge Shang-Chi and the Legend of the Ten Rings at the top of the chart this weekend. The Marvel movie should come in with something around $20 million (or possibly a bit higher), and there’s a strong possibility that will be more than double the second-placed film. If Cry Macho and CopShop both falter, Shang-Chi might even earn three or four times as much as its nearest competition. 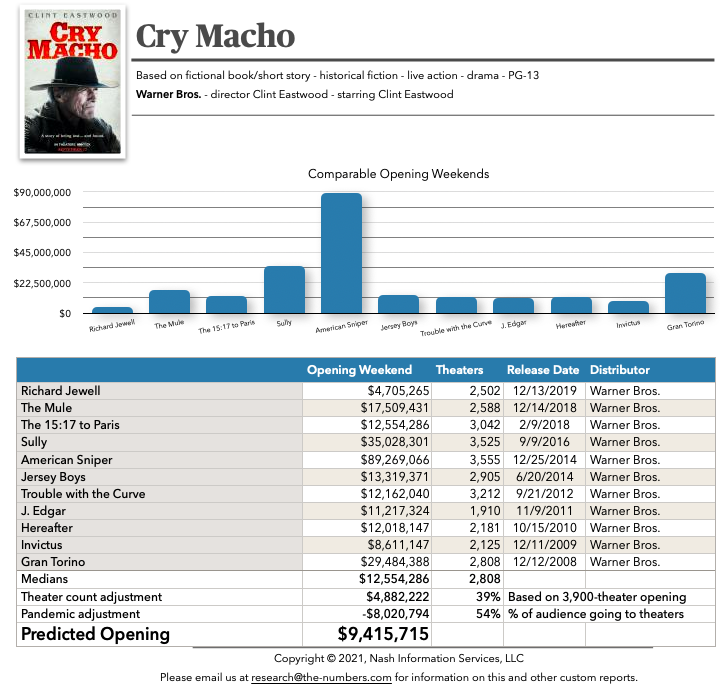 Clint Eastwood is has been one of the most consistent performers at the box office for more than 50 years, and has a relationship with Warner Bros. that dates back all the way to Dirty Harry in 1971. That consistency has faltered in recent years, with Richard Jewell opening to just $4.7 million in 2019—his worst wide opening as a director since Bronco Billy in 1980, and a stark contrast to American Sniper’s run in 2014/15.

Compounding the challenge for predicting this film, Warner Bros. has had three straight films perform very weakly at the box office. The general opinion is that the studio’s decision to release these films simultaneously and at no extra charge on HBO Max has hurt them at the box office. I personally think that’s true, but our model isn’t ready to reach that conclusion yet (I’ll have more on this subject in my next monthly update).

If HBO Max releases are eating into the box office for films like this, then the recent track record for the studio suggests this film will open with around $4 million. As I say, the model isn’t ready to make that leap, but I feel that’s a more likely outcome. 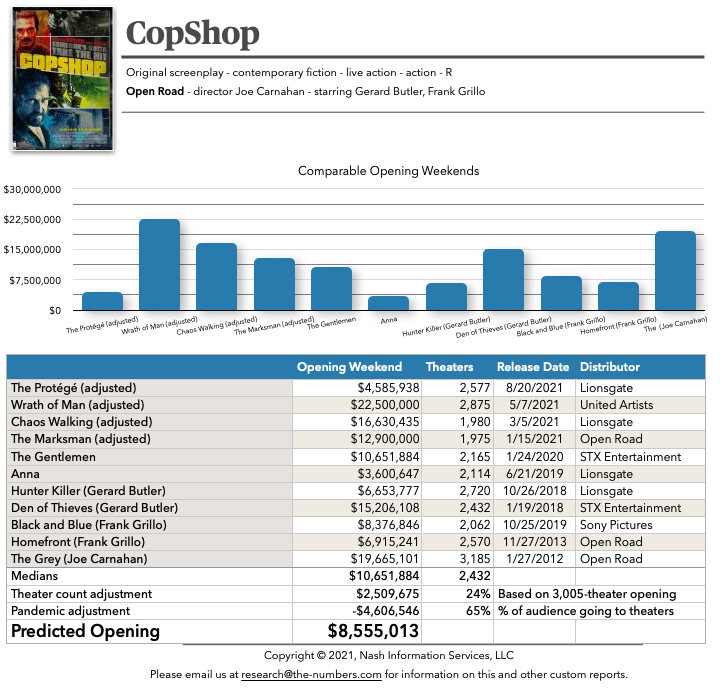 CopShop has pretty good DNA. Director Joe Carnahan has a solid record directing action movies and thrillers, perhaps most notably 2012’s The Grey. He also had a writing credit on 2020’s Bad Boys for Life. The acting leads, Gerard Butler and Frank Grillo, also have deep resumés in this kind of film.

This really feels like a classic mid-September release though, designed to take advantage of a relative lull in major new releases, but unlikely to last long in theaters. Given the talent involved, an opening around $10 million would be about right pre-pandemic, but the fact that it is playing in 3,005 theaters is mainly due to the lack of options for theater owners right now. That healthy theater count boosts the model’s prediction by 24%. The current audience attendance for action movies is around 65%, which pulls things down a bit, but $8.5 million still feels optimistic to me. 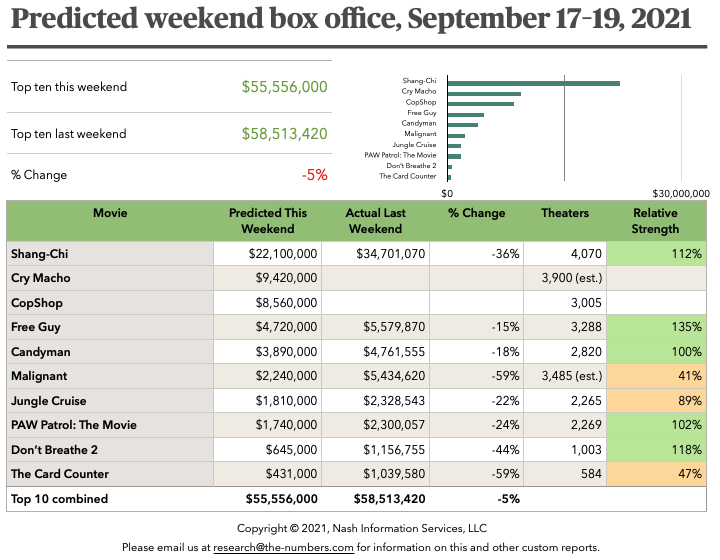 Even though the predictions for the new widest releases look to me to be on the high side, they’re still both well short of the expected earnings for Shang-Chi in its third weekend. With Malignant likely to drop sharply from its opening weekend, this is looking set to be a slow weekend at the box office again. That’s not unusual for this time of year, but things are looking very thin at the moment, particularly with Venom: Let There Be Carnage moved back to October 1 from September 24 (via October 15). The market could really do with a new hit, and soon.