The pups of PAW Patrol are fighting to save the citizens of Adventure City on screen this weekend, and trying to do their bit to keep the theatrical business rolling after several turbulent weeks. Our model thinks they have a shot at knocking Free Guy off the top of the chart, but with four wide releases coming out this weekend there’s a lot to choose from for moviegoers. 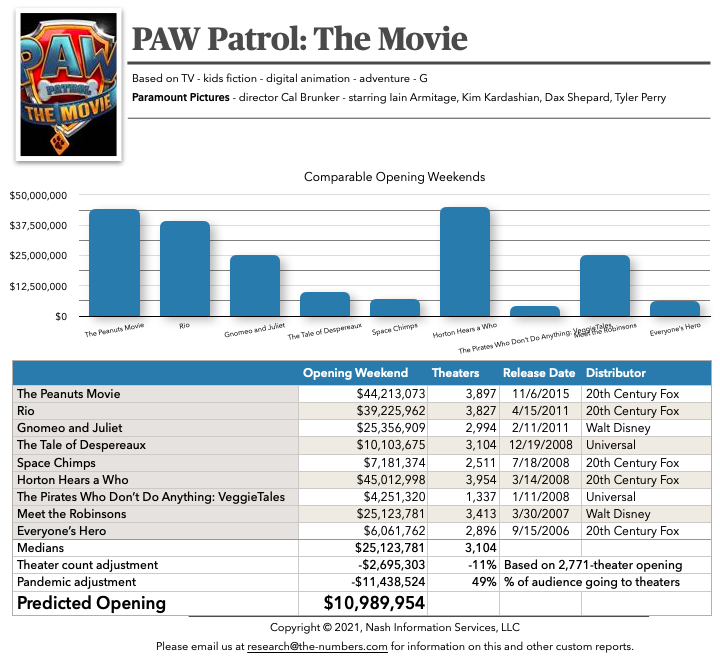 After years of keeping kids glued to TV sets, the Paw Patrol franchise finally gets the feature film treatment young fans have been waiting for with
PAW Patrol: The Movie.

Animated films based on existing franchises have a strong track record at the box office, and the model thinks a film like this should open with around $25 million under normal circumstances. The relative weakness of family films compared to the rest of the market pull the prediction down quite a bit, but it looks likely that the pups will be putting pressure on Free Guy at the top of the chart.

Tom and Jerry’s $14 million opening back in February is an interesting comparison for this one. That movie gave everyone hope that family audiences would return to theaters right at the beginning of the economy opening up again. PAW Patrol could give the industry a shot in the arm this weekend if it manages to beat that number. 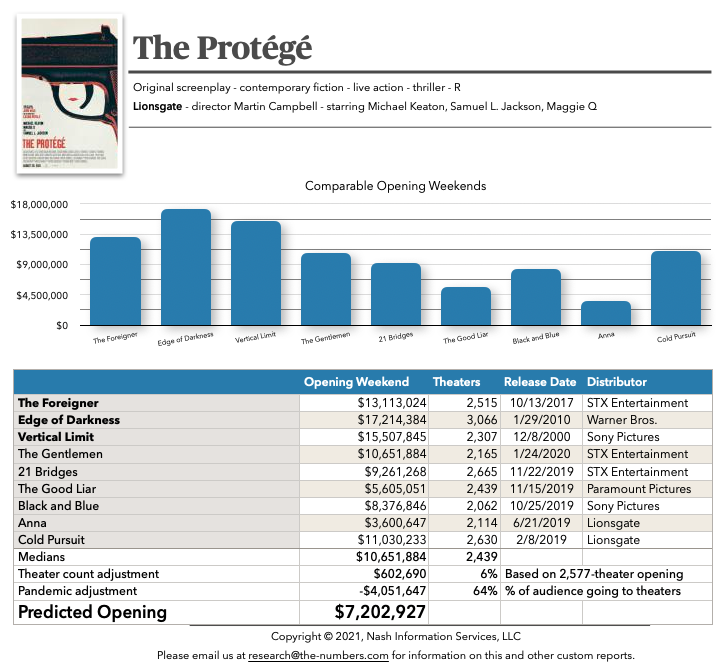 I was a little surprised to see The Protégé come out in second place among the predictions for new releases this weekend, but the model likes its chances in large part because of the track record for its director, Martin Campbell. He has helmed two Bond movies, Goldeneye and Casino Royale, along with the likes of The Mask of Zorro and Green Lantern.

Readers of The Numbers are also giving the film a bit of a thumbs up—it’s currently our most-anticipated movie—which counts in its favor too.

Personally, I think it would be a surprise to see Protégé beat the number three new release according to the model, but we’ll see. 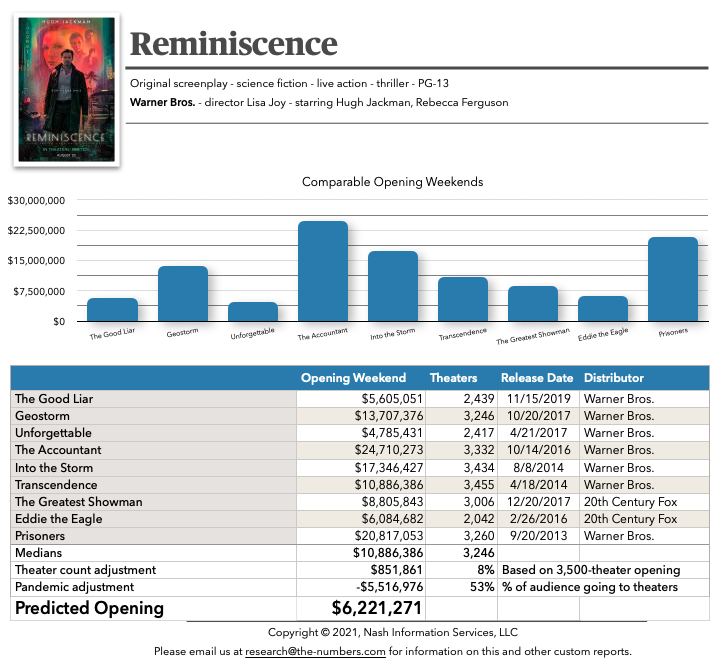 That third-placed new release is Reminiscence, which looks on paper like a surefire hit thanks to a strong visual style, interesting storyline, and the presence of Hugh Jackman, Rebecca Ferguson and Thandie Newton in its cast. Counting against it? Warner Bros.’ surprising lack of big hits from thrillers in recent years. And, although the model doesn’t factor this in directly, its simultaneous release on HBO Max will probably be good enough for decent chunk of its potential audience.

It could certainly beat The Protégé this weekend, but winning the weekend seems unlikely. 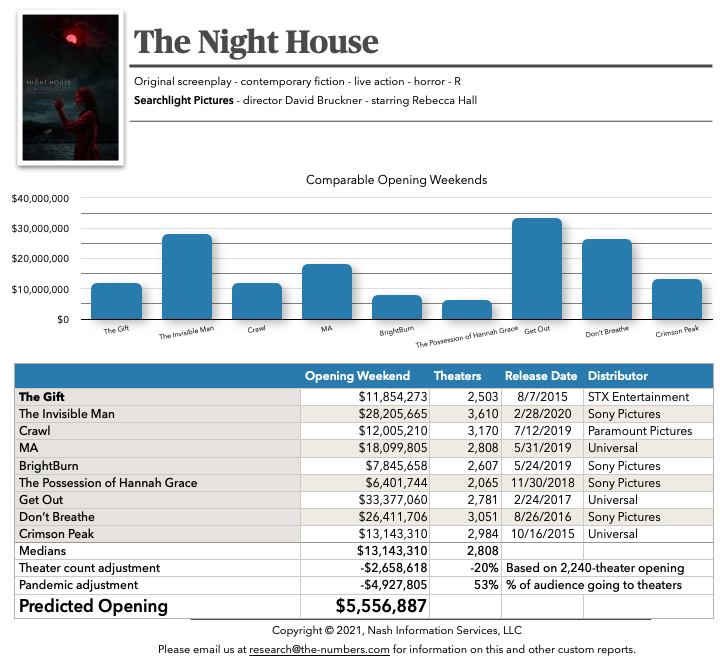 The final new wide release this weekend is the horror movie The Night House, starring Rebecca Hall and directed by David Bruckner of V/H/S fame.

This looks like a film likely to get lost in the shuffle this weekend, particularly given that it’s playing in a relatively modest 2,240 theaters. Given the competition and the challenges getting people into movie theaters right now, $5.5 million would be a very good result for this film, in my opinion. 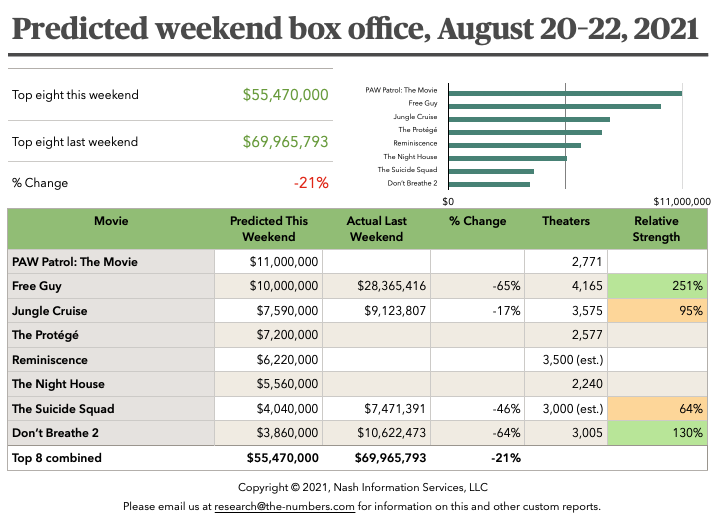 With so many new releases, one might expect the overall market to increase this weekend, but the model doesn’t think any of them will bring in the kind of audience we need to offset a fairly sharp decline in Free Guy’s and Don’t Breathe 2’s earnings in their second weekends. Perhaps the fact that neither is playing on a streaming platform will help them retain business, but we’ll need something to come in well ahead of expectations to see an up weekend for the theatrical business.