Disney is projecting that Shang-Chi and the Legend of the Ten Rings will open with $71.4 million over three days and $83.5 million over the four-day Labor Day weekend, making it the second-best new release of the pandemic era and smashing the Labor Day weekend record held since 1999 by The Sixth Sense. At the very end of a stop-start Summer, this is arguably the best result we’ve seen at the box office. And maybe, just maybe, a sign that studios will see the benefits of holding off on releasing films to streaming on opening weekend. 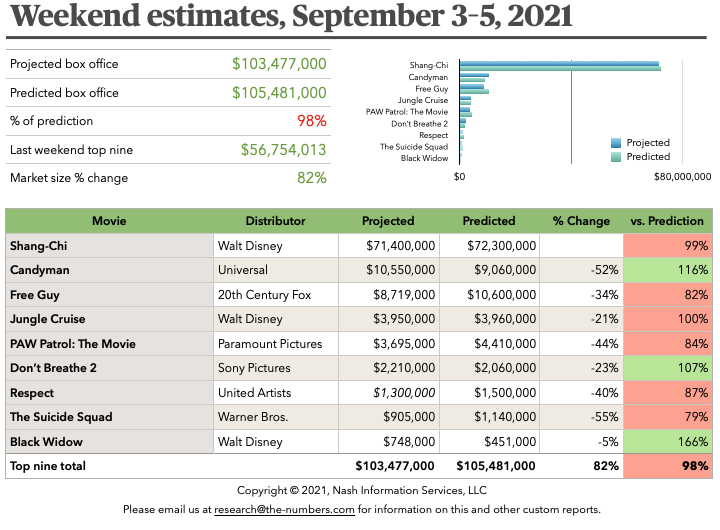 Disney’s Sunday-morning projection is almost exactly what our model predicted based on the Thursday preview numbers, but that perhaps understates how well it has held on so far. Its three-day weekend total will be about 8.1 times its Thursday previews, well ahead of Black Widow’s 6.1 preview-to-weekend multiplier, and in line with pre-pandemic hits like Black Panther. Disney pointed out in their email this morning that Shang-Chi’s Saturday gross of $23.2 million is only $100,000 behind Black Widow’s first Saturday, which suggests excellent word of mouth. Indeed, the film currently sports an A rating from CinemaScore and has a 98% Verified Audience rating on RottenTomatoes.

As one would expect for a martial-arts themed action movie, the audience for Shang-Chi skews male, with men making up 61% of the audience. It also skews fairly young, with 33% of the audience in the 18–24 age range and 26% between 25 and 34. Its longevity will depend in part on how well it can draw in a broader audience, but it will be helped by having little competition over the next few weeks.

Looking at the market more broadly, Shang-Chi probably ate into the audience for Free Guy this weekend as it fell 34% to $8.7 million. It has reached $91.9 million in total now, and should cruise past $100 million. The Suicide Squad was hit hardest of all, although it has seen poor week-to-week performance anyway. Black Widow is having a notably strong weekend though, presumably because of increased interest in all things Marvel.

Overall, the weekend market will land right in line with expectations, and we’ll have the second $100-million weekend for movies this Summer (the other was the weekend of July 9, when Black Widow opened). While we’ll have a few interesting films coming out through the rest of September, it seems very unlikely we’ll reach these heights again until No Time to Die arrives on October 8. That lack of new potential blockbuster releases is frustrating given that we’re seeing that audiences will still show up for the right movie, but Shang-Chi’s weekend should at least encourage the studios to stick with their release plans for the films they still have lined up for 2021.

Its $70-million opening and good day-to-day performance so far will also encourage studios to give films like this at least a small theatrical window, which will be very welcome news for theater owners. After Dune’s premiere in Venice this weekend, early reviews for that film are coming out. While there’s huge divergence in opinions on whether the film is actually good or not, there’s a strong consensus that it is made to be seen on the big screen. It’s not too late for Warner Bros. to give it a couple of weekends in theaters before it debuts on HBO Max, and based on the evidence of this weekend it might make some business sense to do so.