A critical month for the theatrical industry has started with some promising news: Venom: Let There Be Carnage posted a very solid $11.6 million from “preview” screenings on Thursday evening, the second-best result from previews during the pandemic, and not far behind Black Widow’s $13.2 million. Sony Pictures, while presumably very happy with how things are going so far, are urging caution when extrapolating that number out to the whole weekend. Their current projection for the weekend is towards the high end of the $50 million to $60 million range, with a preview-to-weekend multiplier around five.

Here’s what our model has to say about Venom’s prospects, along with this weekend’s other new wide releases and returning films… 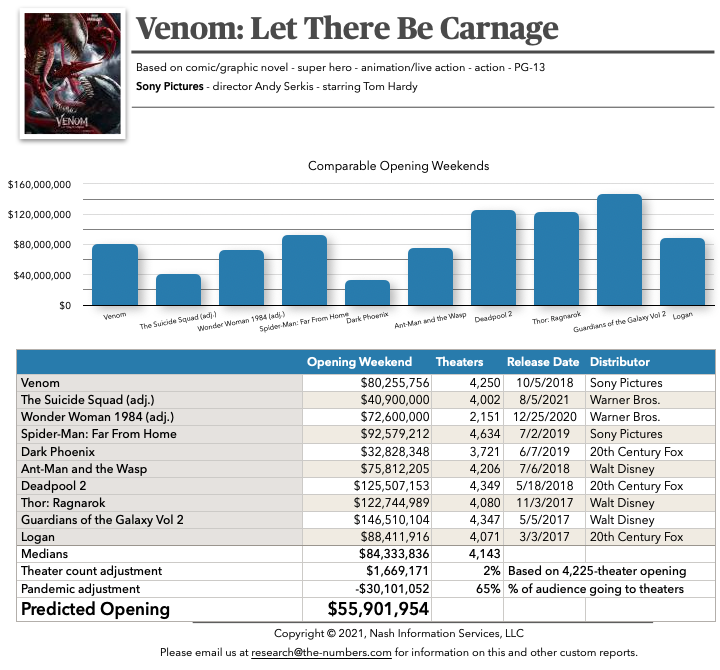 Given an ultra-wide opening in 4,225 theaters and solid audience enthusiasm for action movies (which are pulling in around 65% of their pre-pandemic audience), the model had high hopes for Venom going into the weekend. The range of uncertainty on the model’s prediction is quite high though, given that super hero action sequels like The Suicide Squad and Dark Phoenix have failed to connect with audiences in the past, while Deadpool 2 was an out-and-out hit.

The model’s prediction, prior to the announcement of preview numbers, turns out to be very close to Sony’s projection based on preview results: in the high 50s.

Tempting as it is to leave things there, we also have a model that predicts the weekend based on preview figures, and that suggests that Sony is being very cautious in its projection.

A good point of comparison, I think, is Ant-Man and the Wasp, which earned $11.5 million in preview shows and $75 million over its opening weekend in July, 2018. That was during the Summer, though, which makes the comparison imperfect. Another plausible comp would be Batman v Superman: Dawn of Justice. It made $27.7 million from previews and $166 million over its opening weekend, for a multiplier of almost exactly six.

If Venom has a preview-to-weekend multiplier of six, it’ll end up with a weekend in the high 60s. My practice in the past (see Black Widow’s opening weekend prediction) has been to average the fundamentals prediction and the previews prediction when there’s this much uncertainty. That gives me a final prediction for the weekend of $67 million—about $10 million more than Sony is projecting this morning, but still a very gettable number given what we’ve seen so far. 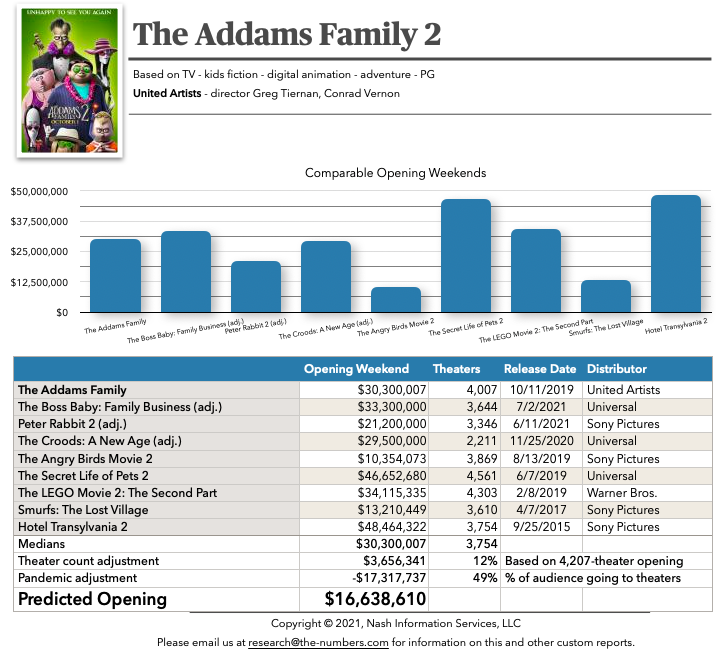 The Addams Family 2 should have no trouble landing in second place this weekend. The model’s prediction feels a little low to me, but family audiences haven’t been coming to theaters in great numbers recently and it’s right in line with the opening for The Boss Baby: Family Business back in July. That movie debuted on Peacock day-and-date with its theatrical release. Addams Family 2 is doing a $20-theater-at-home release today, which isn’t quite the same thing but will probably have a similar effect on box office. 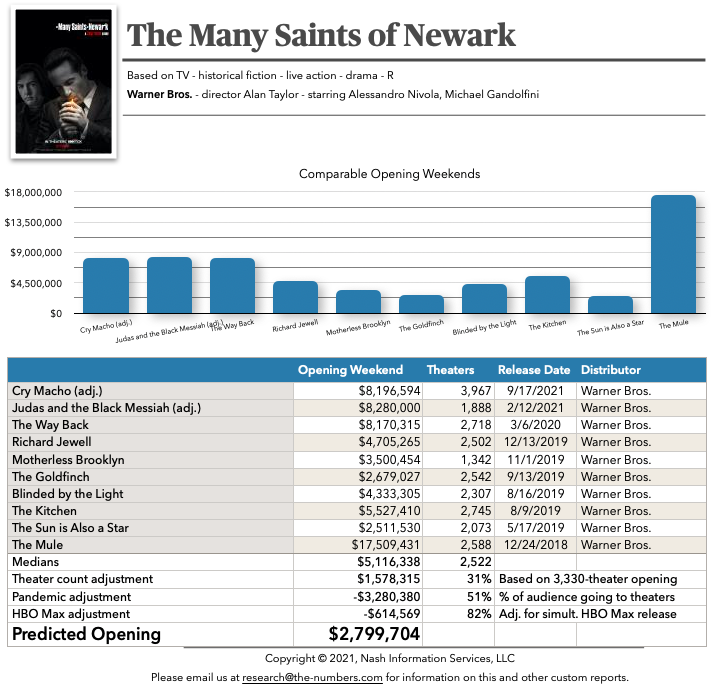 The model isn’t optimistic about the prospects for The Many Saints of Newark. One might think that’s because of its simultaneous release on HBO Max, and that’s something I’m now adjusting for in the model (see my latest market forecast for how that adjustment is calculated). But the truth is that Warner Bros. usually earns around $5 million from dramas on opening weekend. Many Saints might have done better than that pre-pandemic, and this will be a useful test of how much HBO Max releases are influencing box office results, but anything over $3 million is probably a victory for this one. 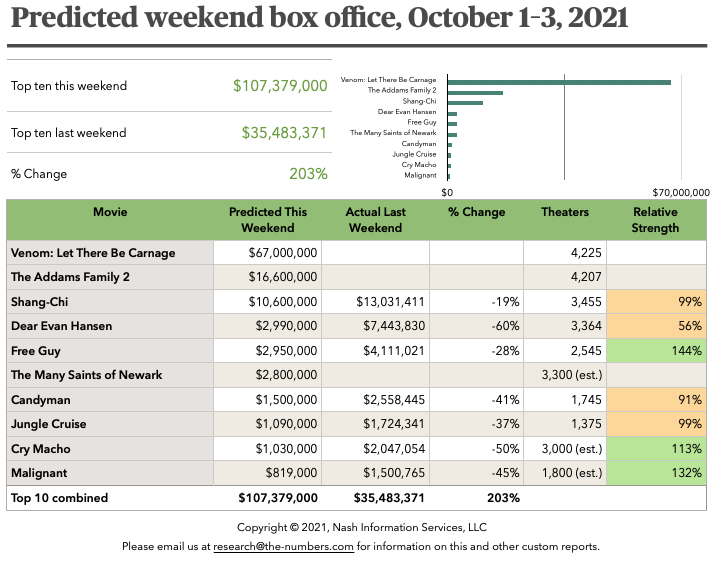 All-in-all the arrival of Venom: Let There Be Carnage and The Addams Family 2 should provide a huge boost to the market this weekend, with all films combining for over $100 million for only the third time during the pandemic. That’s exactly the sort of start we were looking for going into October.