No Time to Die got off to a great start on Thursday evening, earning a reported $6.3 million from previews, the best for the franchise, and beating the $5.25 million Spectre’s earned back in 2015. That’s an encouraging result, and there’s no question the film is on course for an excellent weekend, but No Time to Die presents an unusual challenge for our prediction model. So much so, that I’ve compiled predictions using three different methods this morning. One using our regular model, one using comparisons to the international performance of No Time to Die and its two predecessors, and a final analysis based on the preview results.

First up, here’s how our regular model looks at things… 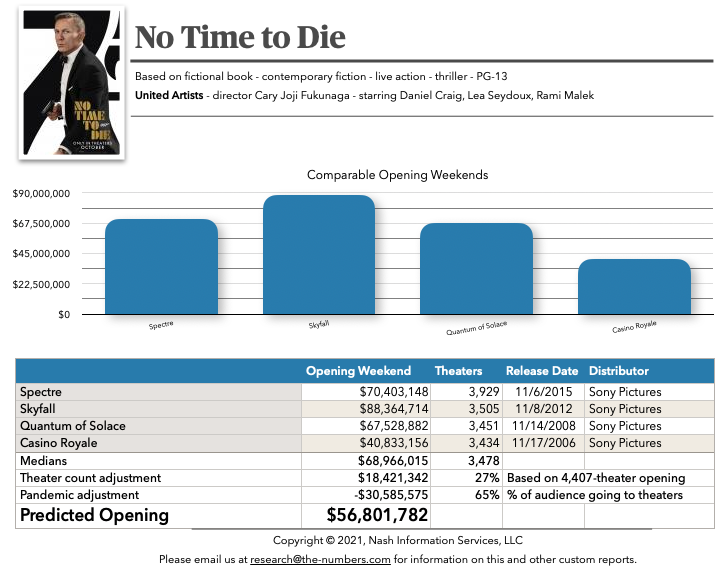 The Bond franchise is the most venerable in the movie industry, spanning 25 or 27 films (depending on whether you include non-cannon Bonds) and 58 years. Pretty much every Bond film has opened well, and ended up being profitable, but the franchise has only recently had opening weekends the contend with the biggest blockbuster franchises. The Daniel Craig era has really been the turning point for that, with Skyfall producing the best Bond opening of all time.

The 4,407-theater debut of No Time to Die is easily a record for the franchise, and significantly boosts the model’s prediction to around $87 million, if it did as well as the average Daniel-Craig-era film. But the pandemic adjustment pushes that number down to $56.8 million, based on the performance of recent action films. My gut feeling is that NTtD will do better than that, and it’s worth noting that Venom: Let There Be Carnage actually beat its non-pandemic-adjusted prediction last weekend—i.e., it reached the entirety of its potential audience, including people the model thought wouldn’t come out to theaters due to the pandemic. The older-skewing demographic for Bond films will probably reduce its potential a little, but prior to seeing the film’s preview earnings, I would say that a $60-million opening was highly likely, and something between $70 million and $80 million well within reach.

There’s quite a bit of variation between different countries, but No Time to Die has generally been doing a little worse than Skyfall and Spectre internationally. Overall, it’s running about 25% behind the average opening weekends for the previous two films. If it does the same in North America, it’ll end up with a $58 million opening weekend. That’s remarkably close to the $57 million predicted by our regular model. That could be just coincidence, but I think it’s fair to say that if this installment performs in line with previous Bond movies, and audiences remaining as cautious about coming to theaters this weekend as they have been in recent months, then we should expect an opening weekend around $60 million.

Those are two big “ifs” though, and Thursday’s preview number suggests that this is either an unusually popular Bond movie, or a bigger share of the population is coming to theaters again.

In line with their appeal to a broader (i.e., older) demographic than comparable action movies and thrillers, Bond movies have unusually high Thursday-to-weekend multipliers. We don’t have a lot of data to go on, but I’d be surprised if No time to Die doesn’t earn more than ten times its $6.3 million Thursday number. So a $60-million weekend looks to be in the bank. If it does as well as Spectre, it’ll end up with $84.5 million this weekend. That seems like an achievable goal. Matching Skyfall’s multiplier would result in a weekend around $120 million, by the way, which seems like a stretch.

For my final prediction, as I did with Venom last weekend and Black Widow earlier in the year, I’m going to take the average of our “fundamentals” prediction and the “previews” prediction, which translates into an expected $70.6 million weekend. Last weekend, Venom blew past my final prediction using this method, earning $90 million compared to a predicted $67 million. Could No Time to Die do the same? Absolutely. This is a hard weekend to predict, and the market looks like it’s waking up after a long dormant period. I’m personally rooting for an $80-million-plus weekend, and I think Bond can do it. 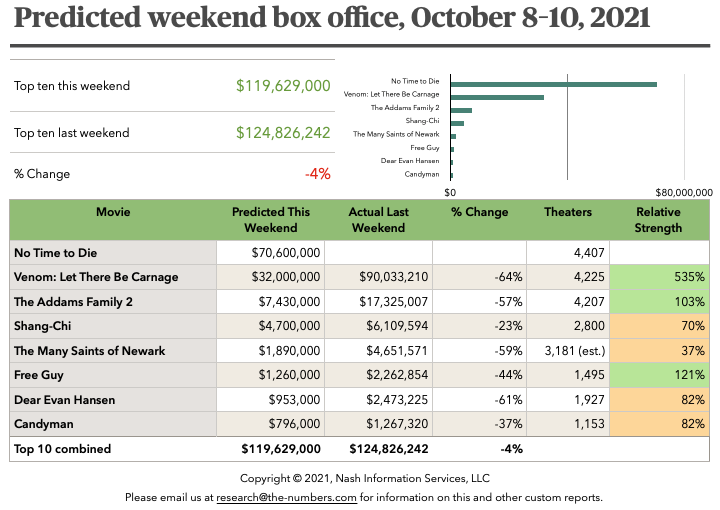 If No Time to Die can hit $80 million this weekend, we’ll see another up weekend at the box office, even with Venom: Let There Be Carnage expected to fall steeply. The model pegs its second weekend at around $32 million, although something between $25 million and $30 million wouldn’t be surprising given its competition. With only one major new release this weekend, and quite a few films having played out in theaters, the fate of the market as a whole is almost completely dependent on the top two films, with The Addams Family 2 providing a little help from family audiences. The model thinks it’ll fall by more than 50%, which may prove to be a little pessimistic.

Overall, the signs are good that the more sustained recovery we’ve been hoping for has finally arrived.