Ghostbusters: Afterlife should easily win at the box office this weekend, becoming the first film in the franchise to do so since Ghostbusters II way back in 1989. It’s outperforming our model’s prediction going into the weekend, and could yet do better than Friday morning’s $30.5-million prediction. Here’s how things stand right now…

As usual for major releases, our Friday-morning prediction is based on a combination of our “fundamentals” analysis for the movie and Thursday’s preview numbers. 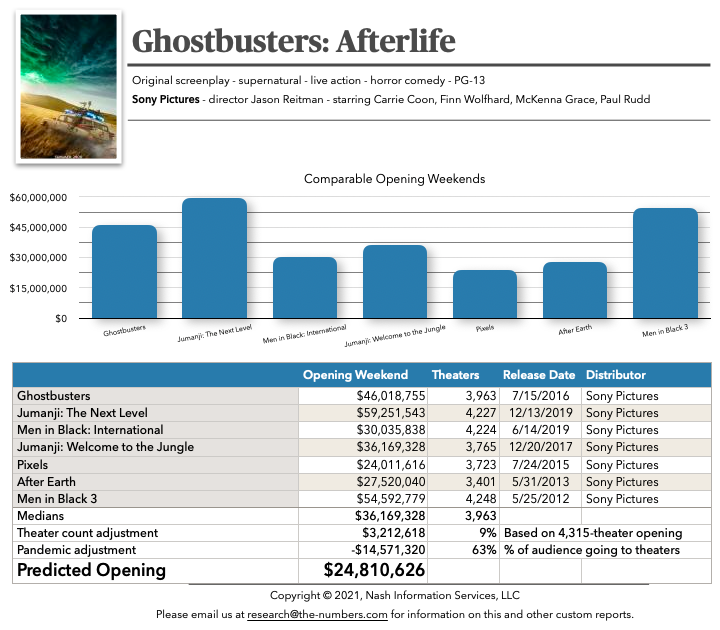 Going into Thursday evening, our model predicted a $24.8-million weekend for Afterlife, based on the performance of similar Sony Pictures releases in recent years. The studio has a pretty good track record with films like this, but its biggest hits in recent years—Jumanji: Welcome to the Jungle is a prime example—have depended on long runs rather than huge opening weekends. With audience attendance hovering around the 60%–65% range, what would have been a weekend in the high 30s, looks like a weekend around $25 million to the model right now.

The previews, however, tell a different story, with a weekend in the high 30s now looking very much on the cards. A family movie like this could have longer legs through the weekend too, which puts $40 million within reach. As has been my practice, however, the final prediction for the weekend is the average of the two numbers: $30.5 million. I have a hunch that might prove to be low. 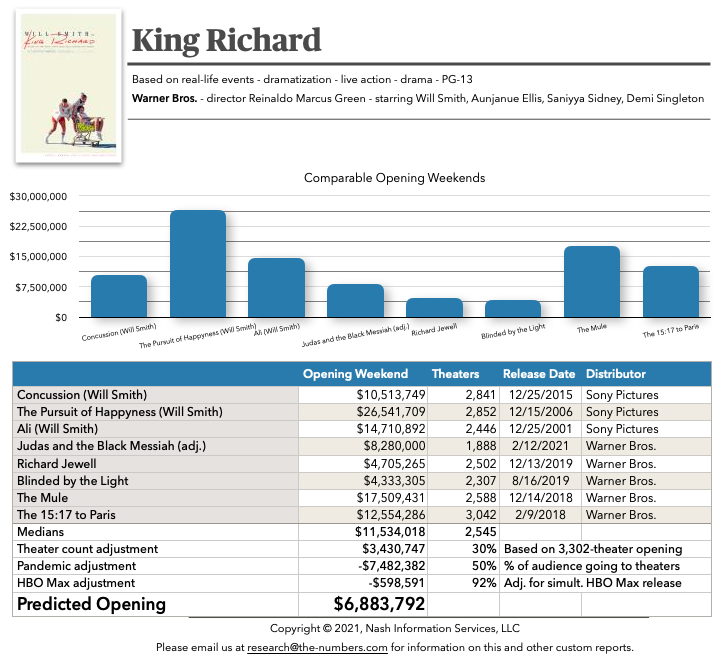 This weekend’s other new wide release is the hotly-anticipated King Richard, starring Will Smith as Richard Williams. This isn’t Smith’s first portrayal of a real person, and he’s clocked up a good track record over the years with this type of film. If we just looked at Smith’s work, a weekend around $15 million would seem on the cards. The model pulls in some other similar films released by Warner Bros. to get a more complete picture, and comes up with an opening weekend around $11.5 million under normal circumstances. That rises back to $15 million with King Richard’s release in 3,302 theaters taken into account.

Once we take into account the model’s estimates that only about 50% of the normal audience is showing up in theaters for a film like this, and that a simultaneous release on HBO Max pulls down the opening weekend by about 8%, that translates to a benchmark for the weekend of $6.88 million. 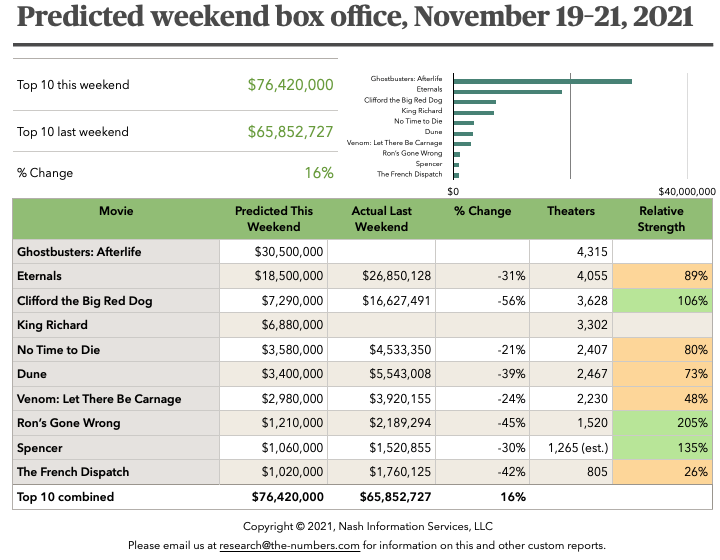 The new releases will help increase the market size by around 16% this weekend, but it still looks fairly sluggish going into Thanksgiving. Hopefully Afterlife and King Richard will both outperform the model’s expectations, and we’ll have a bit of a kick start to Thanksgiving ahead of some big releases on Wednesday.