Dune, one of the longest-awaited films in recent history, finally makes its domestic theatrical debut this weekend, and Warner Bros. will be anxiously awaiting results to see if it has the potential to launch a major franchise—something that doesn’t happen very often in this business. With a reported $5.1 million from previews on Thursday night, the news is good so far. While that’s somewhat behind the best starts of the pandemic era, it’s a very respectable score for a non-sequel, and sets the film on a path towards something around $40 million this weekend. That’s better than what our model expected, given its simultaneous release on HBO Max.

As usual, I’ve run two models. One based purely on prior opening weekends for similar movie, and the other based on how the previews stack up. 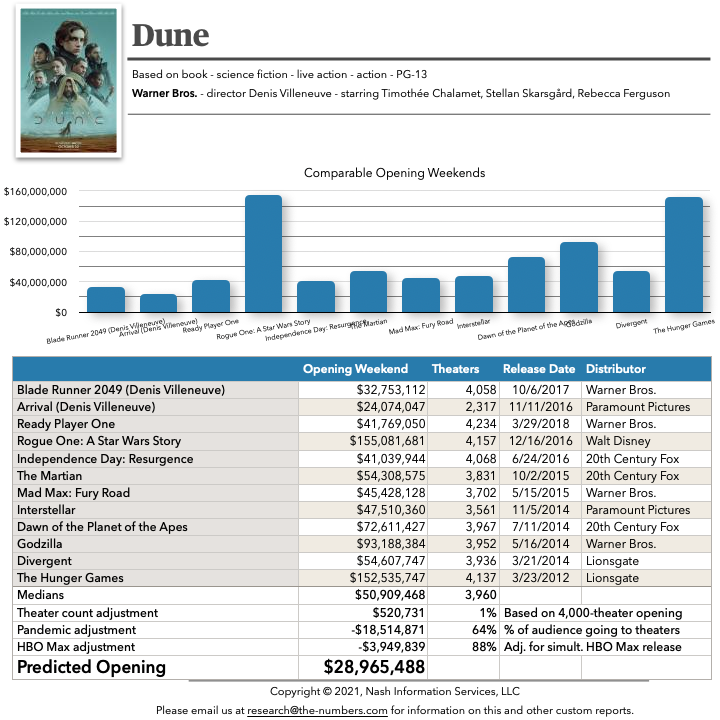 The model was quite cautious about the potential for Dune. Although it’s based on a very popular and influential book, non-sequel science fiction films generally start with around $50 million. A good point of comparison is The Martian, which opened with $54.3 million back in 2015.

Factoring in the model’s estimate that 64% of the pre-pandemic audience is currently going to this kind of film, and that a simultaneous release on HBO Max reduces earnings by a further 12%, gives us a predicted opening around $29 million, before preview figures were announced.

The preview numbers improve the story quite a bit, and put a weekend as high as $50 million in play. Our recent experience with No Time to Die suggests that’s a bit optimistic. If Dune has the same multiplier as the Bond movie, it’ll post $44.7 million this weekend. Personally, I feel like that’s a good benchmark.

In keeping with previous films, our final prediction is the average of the fundamentals prediction and the previews prediction, which produces a final figure of $38.7 million. The film could definitely do better than that (and I think it will, in fact), but anything close to $40 million would be a solid result based on the numbers so far. 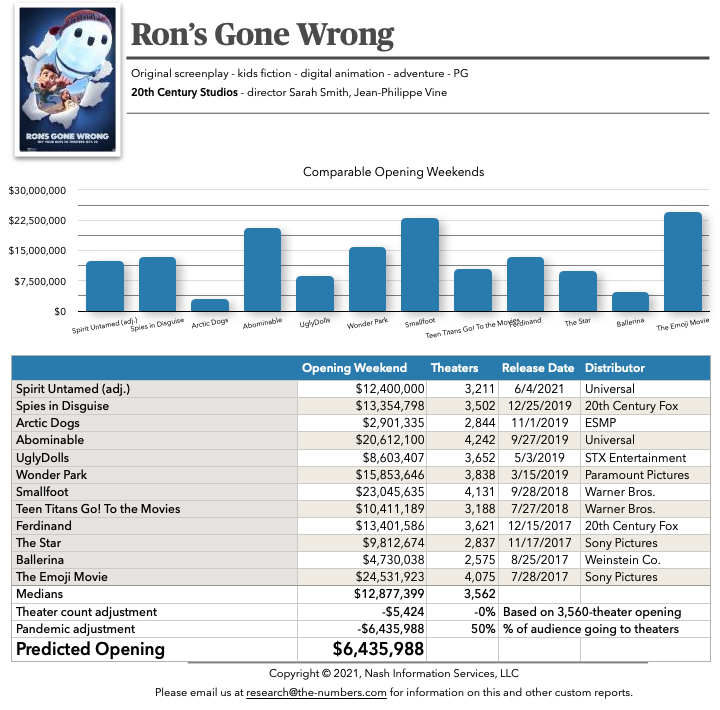 Ron’s Gone Wrong looks set for a fairly modest opening. Non-sequel animated movies not based on a well-established franchise tend to earn around the $10-million mark on opening weekend. Given the current strength of the market for family films, the model thinks this one will do $6.4 million.

Ron’s Gone Wrong earned just $240,000 from previews last night, which suggests that the model’s prediction is on the high side, although family films can have relatively high multipliers.

The final new film with a shot at hitting the upper echelons of the chart this weekend is The French Dispatch. Comparisons are particularly hard for films that open in a small number of theaters, and this is, in fact, Anderson’s widest-ever opening weekend, at 52 theaters. That makes this a very speculative prediction, but the film could certainly hit $1 million this weekend, and make it into the top 10. 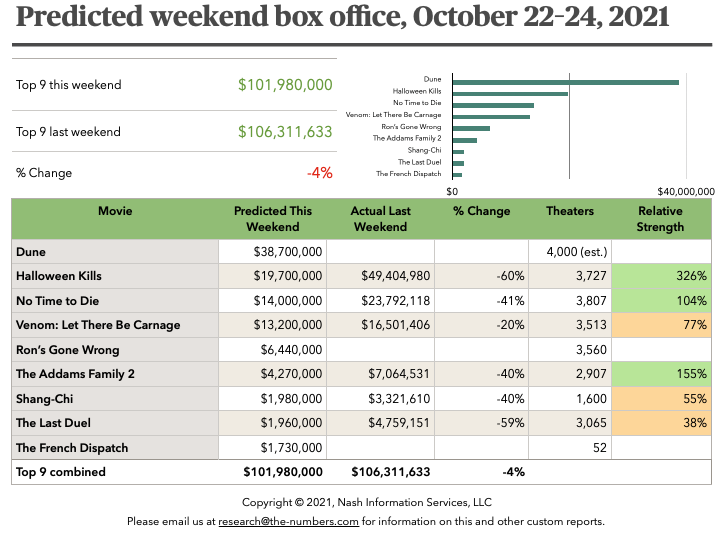 Overall, we’re looking at another week with over $100 million earned at the box office, even if Dune settles for less than $40 million on debut. If it tops that figure, there’s a good chance we’ll see a welcome up weekend at the box office.