Venom: Let There Be Carnage will set a new pandemic-era benchmark this weekend, with Sony Pictures projecting a stellar $90-million opening weekend as of Sunday morning, easily eclipsing the $80-million debut of Black Widow back in July. That number also represents a very solid 7.8 times the movie’s Thursday-evening preview number, which suggests good word of mouth. The good news doesn’t stop there, with this weekend’s other domestic openers, The Addams Family 2 and The Many Saints of Newark both doing better than predicted, No Time to Die opening with spectacular (for the pandemic era) numbers internationally, and Dune continuing to do well around the world.

First, here’s how the domestic numbers look this morning… 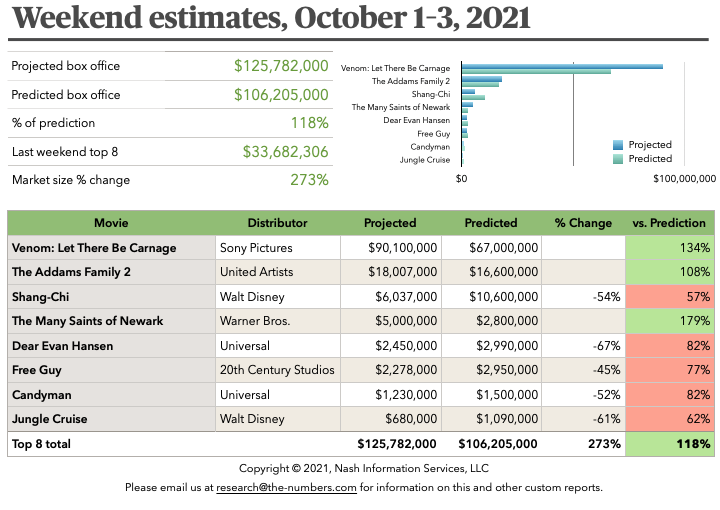 Venom’s weekend number is far ahead of our model’s original prediction of $55.9 million, which was in line with what Sony projected as of Friday morning. Based on the preview numbers, it looked like a weekend in the high 70s was on the cards, so hitting $90 million is a huge achievement. The hold through the weekend suggests good word of mouth, but it also points to the virtues of not playing online at the same time as in theaters. If the film had been available for streaming this weekend, there’s a good chance that many people who heard about Venom from their friends on Friday morning would have streamed it over the weekend instead of coming to theaters.

The performance of The Addams Family 2 is also encouraging, given that it opened day-and-date. United Artists pointed out this morning that its $18.007-million weekend is the best for a day-and-date family release during the pandemic era, beating The Boss Baby: Family Business, which opened with $16 million in July. It’s also 8% above our prediction.

The $5-million debut for The Many Saints of Newark will generally be seen as a disappointment, but it is also ahead of our prediction. In fact, compared to what our model thought, it’s enjoying the best weekend among the three new releases. This is partly a reflection of the challenges in predicting how this film would do, with some significant uncertainty over how its connection to The Sopranos would play out with current theater goers. This result suggests that Sopranos fans did boost the theatrical numbers for the film (and its audience skewed quite old, which is in line with that supposition), but obviously not enough to make this look like a success.

The results for the three new wide releases add up to further evidence that releasing exclusively in theaters does benefit opening weekend box office. The numbers for Venom are really spectacular by pandemic era standards, and set us up for the kind of month we’ve been hoping for since theaters started reopening. With COVID cases on a slow decline in the US as a whole (although still with some worrying trends in some regions), there’s reason for optimism that this time the pick up in business will endure.

Venom will earn a projected $13.8 million in Russia this weekend, which is Sony Pictures best ever opening in the territory. It’ll be expanding into Latin America next week.

After several false starts, we could be at the beginning of a more sustainable recovery at the box office. Roll on Bond next weekend.