There was something for everyone in movie theaters this weekend, but the combination of Halloween falling on the weekend and too much competition made going tough for the six films either opening, expanding, or being re-issued in wide release. The competition hit Dune a touch harder than our model expected, but it will easily remain the top film at the box office, with $15.53 million taking it to $69.4 million in total after 10 days. With another $21.4 million from international markets, it now has $292.1 million worldwide so far. 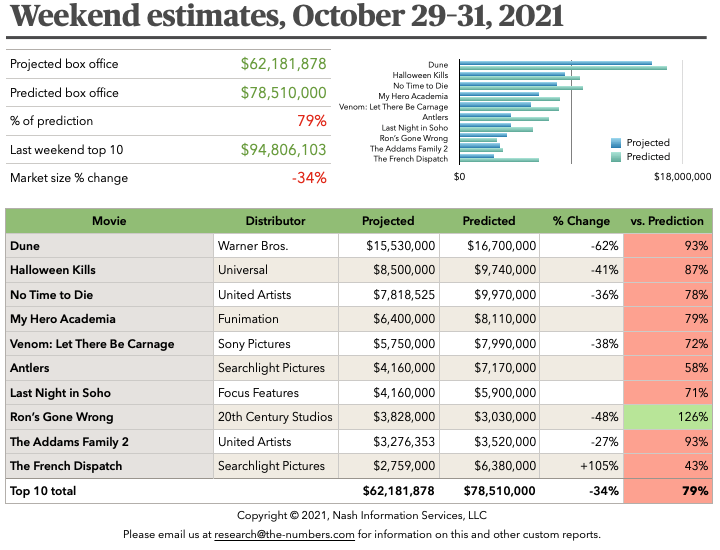 This weekend is a textbook example of competition among the films in release hurting everyone. With the notable exception of Ron’s Gone Wrong, which had limited competition in the family-movie space, every film in the top 10 underperformed the model’s prediction. That’s partly because the model doesn’t take into account Halloween, which can draw people away from theaters, particularly when it falls on a weekend. It’s also because the model doesn’t adjust for competition between films—something that has not been a issue during the pandemic, but is becoming a factor again as a backlog of films hits the market.

The star of the show among the new releases is My Hero Academia: World Heroes’ Mission, which will clock in with $6.4 million—well below Demon Slayer: Mugen Train’s $22.8 million opening earlier in the year, but above My Hero Academia: Heroes Rising’s $5.9 million. Anime continues to be the truly bright spark in the theatrical market at the moment.

The other new releases did OK, but presented moviegoers with too many choices. Antlers is doing battle with Halloween Kills (among others), and Last Night in Soho and The French Dispatch have a large audience overlap. The result is that every non-family film is struggling to hit expectations. That’s not helped by the fact that the pie as a whole is smaller: the top ten will bring in about a third less than last weekend’s $94.8 million.

The good news is that Eternals will give the market a boost next weekend, and there are a few films now playing that could have good legs.

Venom: Let There Be Carnage is tied with Dune internationally this weekend, also earning an estimated $21.4 million, which is enough to take it past $200 million overseas. Totals now stand at $205.4 million internationally and $395.8 million worldwide. Its top market this weekend are Germany, with $2.5m taking it to $7.4m in total; the United Kingdom, with $2.0m for $20.2m; and South Korea, with $1.9m for $16.8m so far. Its biggest markets overall are Russia, with $31.2 million in total, and Mexico, with $21.5 million.

Last Night in Soho opened with $993,000 in its native UK for a modest eighth place. It will earn an estimated $2.296 million from 19 international territories this weekend.