Ghostbusters: Afterlife is tearing into theaters this weekend with a strong $44-million opening, according to Sony’s Sunday-morning projection. That’s well ahead of our model’s pre-release prediction of $25 million, and comfortably exceeds the model’s prediction based on Thursday previews of $36.2 million. It’s also the studio’s second legitimate hit of the year after Venom: Let There Be Carnage and evidence that their theatrical-only strategy is paying off (even if the total dollars involved are modest compared to the pre-pandemic market). 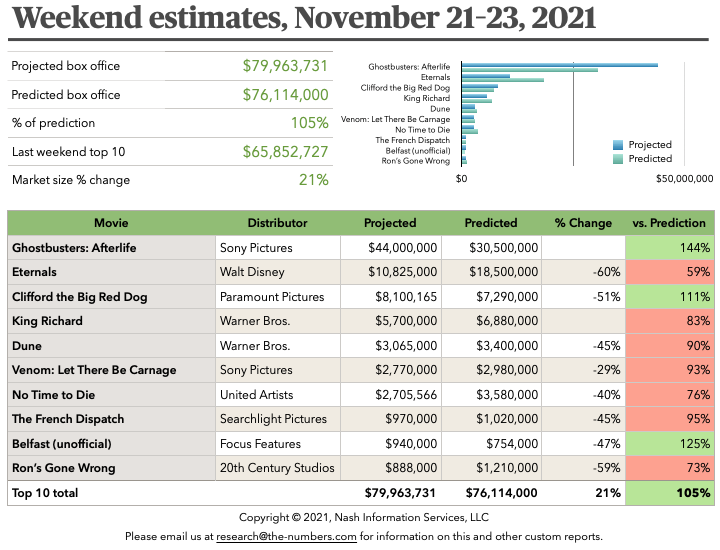 It looks as though Ghostbusters has taken a big chunk out of the earnings for other films in the market, particularly Eternals, which will be down 60% this weekend, per Disney’s numbers. That film still looks successful but, with $135.8 million so far and only $10.8 million more this weekend, it seems certain to fall well short of $200 million.

Clifford the Big Red Dog will be down a fairly steep 51% this weekend, but that’s better than the model predicted. It has enough gas in the tank to do fairly well over Thanksgiving, even with some stiff competition arriving on Wednesday.

The only other film in the top 10 to beat our model’s expectations is Belfast. We don’t have an official number from Focus Features yet, but it looks though it has held up well in its second weekend.

Overall, Ghostbusters’ great weekend makes up for the weakness of the other movies, and the market will be about 21% bigger than it was last weekend. That’s the sort of uptick to be expected ahead of Thanksgiving.

Next weekend is going to be hard to predict. It’s the first big family-focused holiday weekend since the market has started up in earnest, so our model won’t have a lot of information to work with. Stay tuned for further details.