The Marvel Cinematic Universe’s 26th outing is opening this weekend very much in line with similar releases in the franchise. Eternals will land with $71 million domestically, according to Disney’s Sunday-morning estimate. That’s about $4 million less than Shang-Chi earned in September, which was in turn about $5 million less than Black Widow’s $80-million opening in July. But it’s also very much in line with what Doctor Strange opened with before the pandemic. In short, the MCU looks to be doing fine. 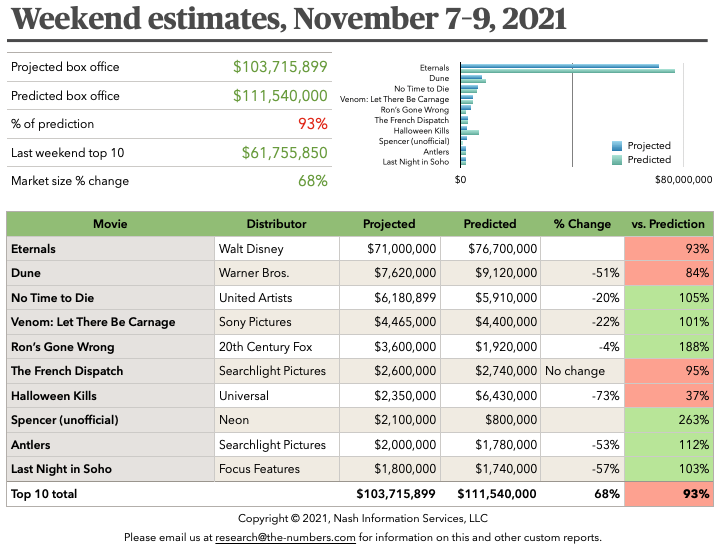 Eternals will come in a little below what our model predicted on Friday, suggesting it was slightly more front-loaded than expected, but certainly not to the extent that its day-to-day performance so far is a cause for concern.

The same can’t be said of Dune, which will be down another 51% this weekend to $7.62 million. It’ll end the weekend with $83.9 million, and looks as though it’ll struggle to reach $100 million domestically. Its availability on HBO Max is probably pulling it down.

There are two stand-out performers this weekend.

Neon haven’t shared an official weekend estimate for Spencer, but the Kristen Stewart biopic looks as though it’ll earn around $2.1 million this weekend—enough for 8th place for the weekend and one of the better specialty releases of the pandemic. Its theater average of $2,100 is almost exactly the same as The French Dispatch’s, and that film will be in sixth place this weekend
with $2.6 million. The performance of both films is an encouraging sign that the demographics of moviegoers is getting broader as the recovery continues.

The performance of Ron’s Gone Wrong is also encouraging. It will fall just 4% this weekend, in spite of losing a lot of theaters. Its performance over the next couple of weeks will be worth looking out for. It’ll have competition from Clifford the Big Red Dog next weekend, which could cause a dip.

Overall, we’ll have another $100-million weekend for the market, but probably the 4th-best total of 2021, in line with Eternals having the 4th-best opening of the year.