Eternals will, as expected, come out on top at the box office this weekend, but it’ll do so by a healthier margin than expected thanks to a decent hold, and a very slight under-performance by Clifford the Big Red Dog through the weekend. Eternals is set to earn $27.5 million, according to Disney’s Sunday-morning projection, which will take it to $118.8 million domestically. That makes it one of the top 10 films of 2021 already, with quite a way to run. 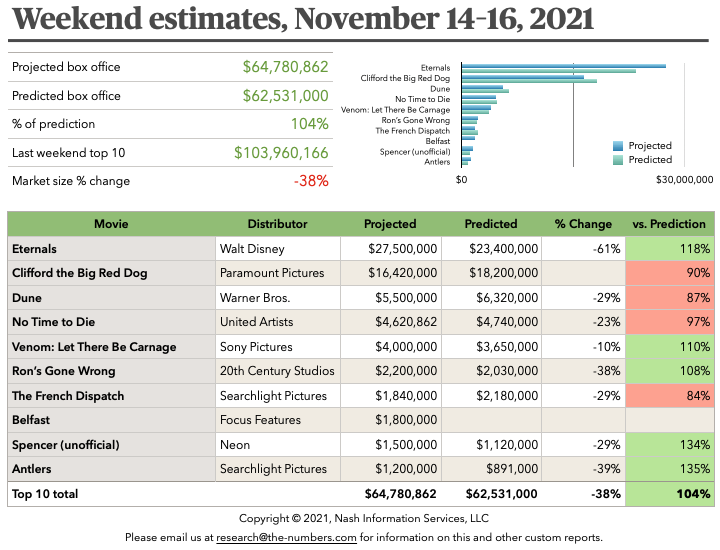 Eternals’ 61% weekend-to-weekend decline compares favorably with Venom: Let There Be Carnage, which fell 65% in its second weekend; but that drop is worse than Shang-Chi’s 54% decline on its second weekend. Shang-Chi has now earned almost three times its opening weekend, while Venom is running around 2.25 times its opening weekend (still with some way to run). Assuming Eternals ends up somewhere between those two multipliers, it should end somewhere around $180 million domestically—possibly enough for a spot in the top five films of the year when all is said and done—but also a little below our model’s prediction.

Clifford the Big Red Dog is enjoying a good opening with $16.4 million over the weekend taking it to $22 million over five days. That is essentially tied with The Boss Baby: Family Business for the third-best first five days for a kids movie during the pandemic. The only films to beat it are Cruella, which made $28 million in its first five days back in late May/early June, and Space Jam: A New Legacy, which earned about $35 million in its first five days. The fact that Clifford opened on a Wednesday makes that an imperfect comparison, but its performance is an encouraging sign that family filmgoing might be picking up as a we go into holiday season.

The other noteworthy feature of the domestic market this weekend is the trio of movies nestled in the $1.5 million to $1.84 million range. Belfast will open with about $1.8 million, which is a little below The French Dispatch’s $2.6-million first weekend in over 500 theaters, and Spencer’s $2.1-million debut last weekend. Belfast is playing in fewer theaters though: 580, compared to 996 for Spencer and 788 for The French Dispatch.

All three films will be vying for Oscars in a couple of months, and they are beginning to give us an idea of what the prestige art-house market looks like. Back in the day, $10,000 per theater on opening weekend was the benchmark. Based on the results of these three films, $3,000 looks like the new benchmark—Belfast is doing $3,100 per theater this weekend, Spencer did $2,100 per theater last weekend, and The French Dispatch made $3,330 per theater in its first weekend in over 300 theaters (after a $26,000-average from 52 theaters on opening weekend). This is a sector of the market that I expected to be hit harder and longer by the pandemic, since its audience skews older and more cautious. If it ends up 70% smaller than it was pre-pandemic, that’s a worrying sign for art-house theaters in general. It’s early days yet, though, and it’s great to see these kinds of film back in theaters at all.