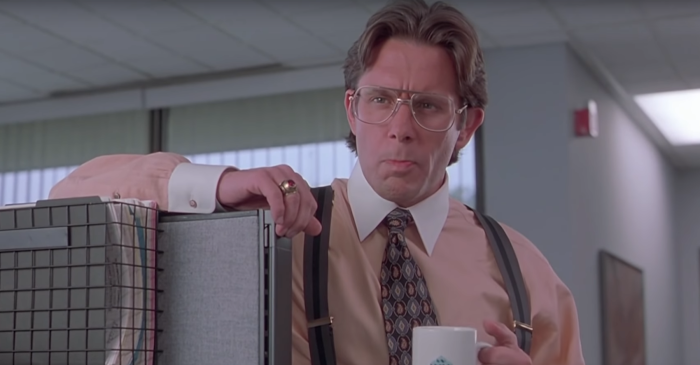 I have a friend who used to work in one of those larger department stores in which different companies give out free samples of food in order to lure people in to try their business. She herself was friends with a guy who played the part of one of those shop floor sirens. He worked for a chocolatier/bakery type of place. Every day he’d be out there from morning until later afternoon, gliding among the customers on his invisible leash, left hand extended and pointedly moving a plate of delicious treats in the air like a snake swaying before its prey. He seemed to be really good at his job. Enthusiastic, tireless, and with a decent success rate—people would often bite both the metaphorical and literal bait and follow him back to the main kiosk. This is why my friend was surprised that one day she came in to find him being loudly berated and very definitely fired from the job that he seemed to do so well. She hurried past the scene, late for her shift but craning her neck to try to understand the cause of the ruckus. She remained none the wiser until her break, at which point she texted him to find out what had happened. It turned out that the guy had been siphoning off supplies from the sample tray that he was using to lure customers in, funneling a steady procession of delicious treats straight into his mouth whenever he thought no one was looking. He got so good at not being detected, and his hit rate with customers otherwise was so steady, that the owner of the kiosk never suspected anything strange was happening. Until, that is, that morning, when the treats thief had finally apparently reached some sort of upper limit on his consumption of free deliciousness, and upon taking another secret mouthful, proceeded to vomit all over a paying customer’s shoes.

That was quite an understandable firing, all things considered. Stupid in many ways, but understandable. I bring it up because Twitter user Katie Harrington posted a prompt the other day that asked users to ponder the opposite end of that understandable scale when it comes to ridiculous trouble that people have gotten into at work. See for yourself why Jimmy McNulty was right:

What’s the weirdest thing you ever got in trouble at work for?

I was accused of being disrespectful because the six people I CCd on an email weren’t listed in order of seniority.

Having an eyebrow ring at Sainsbury’s. Manager said it gave a bad impression of the business and made me cover it with a plaster. So when customers asked me why I had a plaster on my face I’d tell them I’d been in a fight

Oh, my boss told me off for “not cc’ing him on all of my emails” so I did it until he begged me to stop. That is how severely he underestimated my workload.

I had a week where I worked 39.5 hours because of an appointment and I got a “verbal warning” via email and a long talking to by my manager: “I’m not going to tell you that YOU HAVE TO work 40+ hours”. Ignoring weeks when I did 60.

I worked 40s exactly until I quit

This one hits home.

“Why don’t you just email when you’re unwell?”

I dunno, maybe because the anxiety had reached such a degree that merely starting an email drove me into a panic attack where I couldn’t even manage to type a sentence.

At a Christmas party, a manager to me told me he couldn’t talk to me because he couldn’t stop looking my “tits”. I told him to cop on. I was told at my PR not to be rude to management. When I told them what happened he told me to maybe think about what tops I wear on nights out.

Bloody hell what were you printing?

How dare you share that secret information! Criminals should have to read the giant Hours sticker on the shop door like everyone else.

Generating an entire user manual for a new call centre system.
Handing it to my boss immediately before his meeting with his seniors.

Meeting over, he marches to me demanding why my name was on every fucking page’s footnote

“Because I fucking made it”

As a young postman in the 1970s I got reprimanded and sent home at 3.30 in the morning for wearing trainers. I had to change into proper boots. The supervisor who sent me home was my dad, who had taken me to work in his car. I had to walk home and back.

I was once asked if someone on my team should be fired because they looked sleepy all the time. It was just her eyes were hooded. I am not firing someone for their face!

I wrote the word “obfuscate” in an investigation report. My manager called me in to say the language in the report was too complicated.

This was technical writing for an out of specification investigation of a drug written for people with masters and PhDs and the FDA.

I wrote *NB – PLEASE READ* in an email subject to a bunch of people in science and was called up for using offensive language to staff members, because one of them thought I meant “No Bulls***” and not “Nota Bene”, the literal abbreviation for “note this well”.

Demanding N95s in April 2020. No testing, working in the operating room while intubating patients. Hospital admin locked them up and only the anesthesiologists and surgeons we allowed to have them.

I led a protest. pic.twitter.com/eJ9ZZO0X0p

I was called insubordinate because as an assistant manager I stood up for the staff & pointed out (privately) to the general manager that he was violating labor laws and creating a hostile workplace. PS: I’m a woman and was also told I was being hysterical.

My boss very publically shouted at me for ten minutes telling me how naive and unbusiness-like I was for asking if I could go to a professional conference organised by a supplier.
“It’s obviously an attempt to bribe you” (well, duh)

He then went to the conference.

I centre aligned postal addresses on envelope labels instead of left aligning them and was consequently called a ‘stupid fucking pigeon’ by the MD.

They were his personal Christmas cards which I was actually addressing for him… in my lunch break.

Sidebar – my pet hate is people sitting in front of Excel who use a calculator to make the simplest of calculations. I once worked with someone who populated a spreadsheet with data, added up the rows manually on the calculator and typed the answer. They thought I was a wizard.

apparently, I should have written,

because we don’t want John and Charlie to feel slighted.

In a video shop 20 or so years ago, I turned off Gladiator and put on a different film. The Assistant Manager gave out to me because Gladiator was the only film he wanted shown in the shop. When it ended he put it on again. Every day.

It was once written in an annual review that I was too happy.

Local newspaper. Got a bollocking for taking 1hr lunch break. I let the manager bawl himself Red then gently reminded him that 1hr lunch break was in my contract.

My parting shot – in best Michael Caine – was “don’t you ever speak to me that way again”.

A man I worked with screamed & threw his pen across the office because I’d sent him five emails in one day, which he said was too many, & then came to give me a lecture on email etiquette & flooding people’s inboxes (all of my emails were replies to emails he’d sent me that day)

I once didn’t get a job purely because I’d politely declined a drink of tea or coffee at the final interview (I dislike hot drinks) and they decided from that I wasn’t a team player! By their own admittance, I was perfect for the job otherwise. Bonkers.

Fitting sausages in the gaps on the ceiling so that when they got cold and shrunk they fell on people.

I caught a wasp in a coffee mug. I opened a 2nd floor window, and flicked the mug outwards in order to eject the wasp. The handle of the mug stayed in my hand, but the body of the mug broke off and drew a graceful arc through the sky as it hurtled towards my boss walking below.