At 91 years old, multiple Oscar-winner Clint Eastwood continues to be a surprisingly active filmmaker. The fact he could make his latest movie, Cry Macho, completely during a pandemic at his age is particularly impressive, although, at this point, some may be wondering if he should continue to star in his own movies, and that’s something likely to be discussed as people see the movie.

Based on N. Richard Nash‘s novel, which Nash adapted with screenwriter Nick Schenk, the plot is simple with Eastwood playing Mike Milo, a retired rodeo rider who is asked by his former boss (Dwight Yoakam) to go down to Mexico and retrieve his 13-year-old estranged son, Rafo (Eduardo Minett). The movie cuts right to the chase as Mike does just that and runs into problems with the boy’s mother Leta (Fernanda Urrejola), who doesn’t want to let the abused boy go. Rafo hides in the back of Mike’s car with his rooster “Macho,” and as they drive back to the States, Leta sends men after them to bring the boy back.

Eastwood has earned enough cred in Hollywood that he can really do and make whatever he wants. He obviously liked Nash’s novel or the screenplay enough to direct and star in this one himself, failing to read the room before making another white savior movie similar to his 2008 offering, Gran Torino. 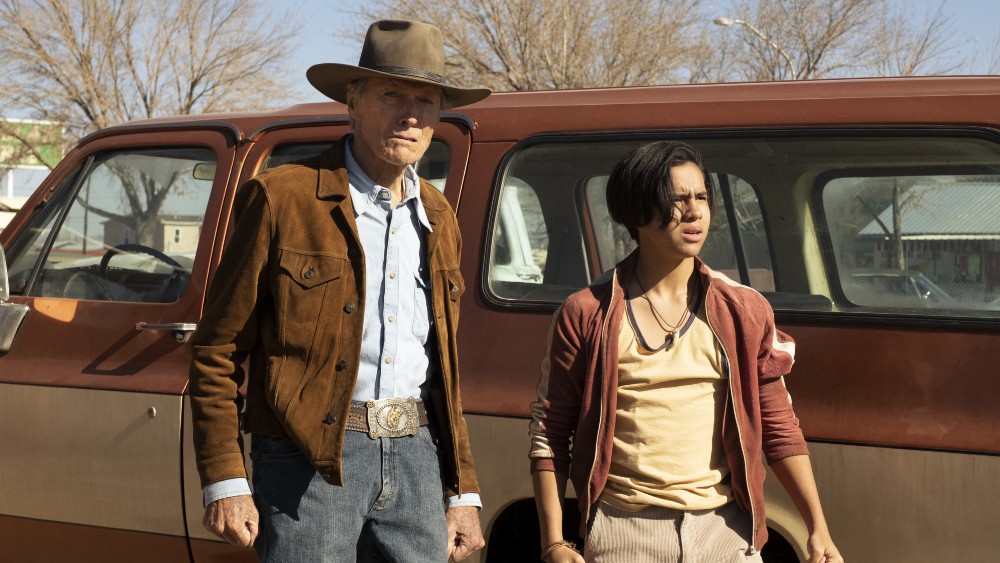 Fortunately, Cry Macho is only that to a point, and it’s more about the relationship between Mike and Rafo as they travel on the road back to the States. Maybe it wouldn’t be so hard to not be so cynical about it if Liam Neeson hadn’t just made almost this exact same movie with The Marksman, released earlier this year. Surely, it’s purely coincidence, because Eastwood has been trying to make Nash’s novel for almost ten years, but the results just aren’t even on par with Eastwood’s last on-screen role in 2018’s The Mule. Cry Macho also feels far more episodic where there are a number of successive scenes that don’t necessarily connect together.

Eastwood alternates between uttering one-liners through gritted teeth or giving someone a steely glare, but his raspy voice has become a bit of a detriment to his performances, and more often than not, he seems to be struggling to emote at all. His young co-star, Eduardo Minett, making his screen debut, isn’t much better, barely able to get his lines out between his poor English and seemingly trying to utter his lines from behind gritted teeth ala Eastwood. Mike and Rafo end up getting stranded in a small Mexican town where the film finally hits its stride as they meet a loving woman named Marta (Natalia Traven) who is raising four young girls. Marta allows the two men to soften up as Mike becomes an ersatz veterinarian for the small community and Rafo too finds the love of a true family. Traven gives a better performance in the movie than anyone else, and Eastwood and Minett rise up to meet it. 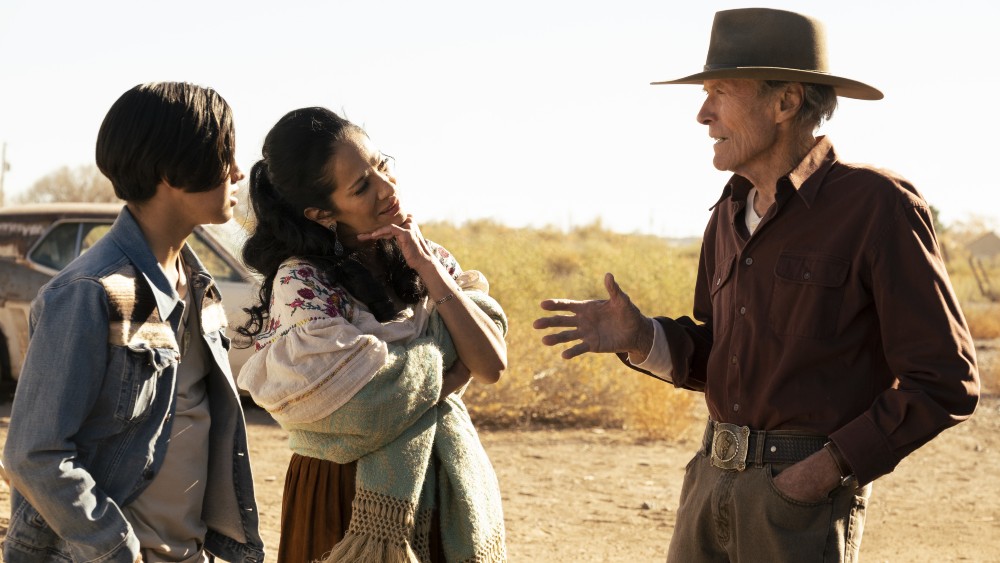 Eastwood works for the first time with Cinematographer Ben Davis, BSC, who has mostly shot Matthew Vaughn’s comic book movies and even a few Marvel movies like Doctor Strange, Captain Marvel, and Chloe Zhao’s upcoming, Eternals. He also shot Three Billboards Outside Ebbing, Missouri, which might be more in line with the look of Cry Macho, and Eastwood’s movie certainly benefits from Davis’ ability to use natural sunlight outdoors while capturing the stunning vistas of the Mexican landscape, and also using the lighting to create moodier indoor shots.

The music by Mark Mancina is partially the noodly piano playing that Eastwood seems to espouse in his own scores, but as the film goes along, Mancia does start using the music better to enhance the emotions on and action screen, which often becomes necessary due to the weak performances.

Unfortunately, the section of the movie that works the best, Mike and Rafo settling down in the village, is fleeting, before they’re back on the road being pursued again. Those expecting more action or thrills of any kind are also likely to be disappointed. Sure, Eastwood does ride a horse… but very slowly…  in a scene where he’s trying to break a mustang, it’s so obviously a stuntman that no amount of editing could make it seem otherwise. The film then ends abruptly, leaving far too many questions about Rafo’s fate, as it instead cuts back to Mike having a slow dance with Marta. Some may be glad things worked out for Mike; others might be wondering why the movie ends before giving Rafo any sort of happy ending.

Other than what’s mentioned above, Cry Macho isn’t a movie about the crafts, which is a shame, because neither the script nor the performances do much to make it a particularly worthy Eastwood offering either for his fans or otherwise. Mind you, Cry Macho isn’t terrible nor unwatchable, but the fact that a rooster almost steals the movie shows this to be a flawed cock-up in Eastwood’s erratic third act.

Cry Macho will open in theaters and stream on HBO Max starting September 24.