Fifteen years later, Danny DeVito’s 2006 appearance on The View remains one of the show’s most memorable moments. (Photo: ABC)

From Star Jones to Rosie O’Donnell and Elisabeth Hasselbeck to Meghan McCain, The View‘s co-hosts have generated more than their fair share of headlines for their on-air antics over the years, but 15 years ago last month, guest Danny DeVito did his part when he sat down for one of the most unforgettable interviews in the show’s storied history. As The View marks its 25th year on the air, in the spirit of reflection, we’re breaking down the actor’s’s drunken appearance on the show, a Bush-era controversy spurred on by a raucous night out with George Clooney:

The Calm Before the Storm

Shortly before DeVito arrives at The View‘s studios, he sits down for an interview with Fox & Friends. Despite the early hour (and what we later learn about the wild night that preceded it), he appears only slightly drunk. DeVito has stopped by the Fox News program to promote his new holiday movie, Deck the Halls, and he spends the bulk of the segment rambling about the Christmas decorations featured in the film, and his on-screen wife Kristin Chenoweth’s singing abilities — “She sang to me in the breakfast room, in the kitchen, bed, everywhere,” he says.

The actor manages to collect himself when host Steve Doocy asks if he still speaks with then-California Gov. Arnold Schwarzenegger, and whether the governor has done anything for him personally. “That’s not what it’s all about,” replies DeVito. “That’s what the people who are in office in Washington are about. But Arnold’s different. No, Arnold is different. You may not think that or you may not know that, but Arnold’s different. It’s all about raising the quality of life for the people in this state.”

A very coherent answer to a ridiculously dumb question. And yet, three hours later, DeVito appears ro be in a drunken stupor…

Danny DeVito Sits Down with the Ladies of The View 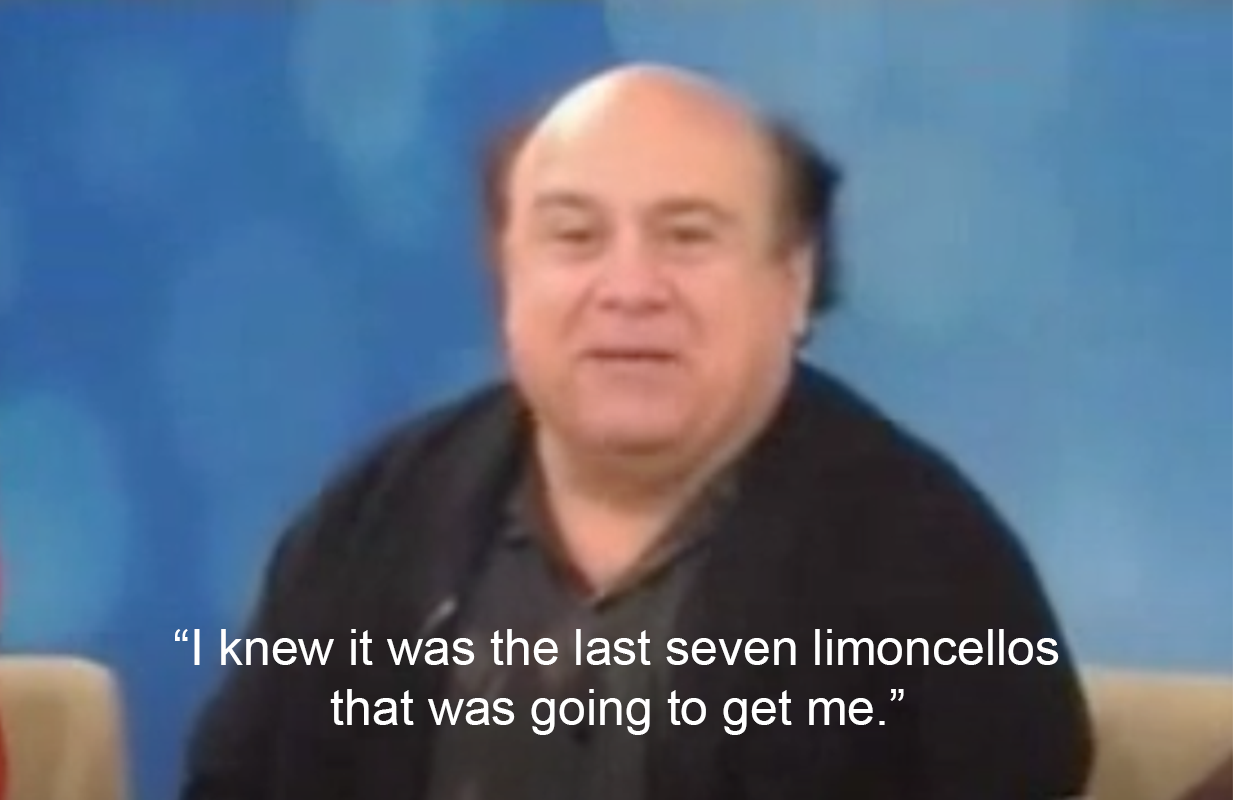 When it comes time for DeVito’s appearance on The View, he happily hugs the ladies and sits down on the couch. Within seconds, Joy Behar, who clearly spoke with the actor backstage beforehand, tees him up: “Danny has been out partying all night with… tell them. I’m so jealous,” she says. He sheepishly replies that he was with “George,” but Behar can’t wait for him to get out the star’s full name. “Clooney!” she says, earning a round of ooohs from the co-hosts and their studio audience.

“I knew it was the last seven limoncellos that was going to get me,” says DeVito, explaining that he had yet to sleep them off. His remark prompts a classic one-liner from Barbara Walters, who jokes, “Don’t do it now!”

Danny DeVito Pretends Like He’s Breaking Into the White House

Walters, clearly ready to move past the limoncello of it all, asks DeVito if “it’s true” that he’s been to the White House, a reference to an earlier discussion in which Elisabeth Hasselbeck revealed she’d been invited to the Bush White House and offered to bring Rosie O’Donnell along for the ride. “I don’t know if they would want me to go,” O’Donnell tells DeVito, who assures her that she could find a way in, if she really wanted. “You know, those back entrances, that’s the way to go in, in disguise,” he says, before pretending like he’s digging his way onto the grounds.

DeVito goes on to say that while he was invited to the White House during the Clinton administration — “[It] was really nice. The place had that kind of Clinton feeling,” he tells the co-hosts — he hasn’t been back since President George W. Bush took office. “I didn’t go after, you know, numb nuts,” he says, though the phrase “numb nuts” is bleeped by ABC’s censors. The audience reacts accordingly, with mostly laughs and a few groans, as Behar beams beside him (Hasselbeck, for her part, slaps on a fake smile and remains completely still).

The actor then launches into an impression of Bush and Secretary of Defense Donald Rumsfeld “trying to figure out what to do with our country and our women and men in the military,” complete with Three Stooges-style hand gestures and awkward facial movements. “What about that hat trick last week?” he says, leaning across Walters to speak directly to O’Donnell (the Democrats took control of Congress in the 2006 election, one day before Bush announced Rumsfeld’s resignation). “Rumsfeld, the House, and the Senate! Ta-da!”

Danny DeVito Jokes About Having Sex in the Lincoln Bedroom

Hasselbeck attempts to steer the conversation back into safe territory by asking about his upcoming 25th wedding anniversary to actress Rhea Perlman — “Let me ask you about another house” is a terrible transition, even when your guest is sober — but DeVito declines. Instead, he discusses his eventful evening sleeping in the White House’s Lincoln Bedroom with Perlman. “We went in, and we made it our business to really wreck the joint. I mean, every place in that bedroom was… utilized,” he says, with an assist from O’Donnell. “That’s the word!” she responds, to wild applause.

Danny DeVito Appears to Throw Up in His Mouth 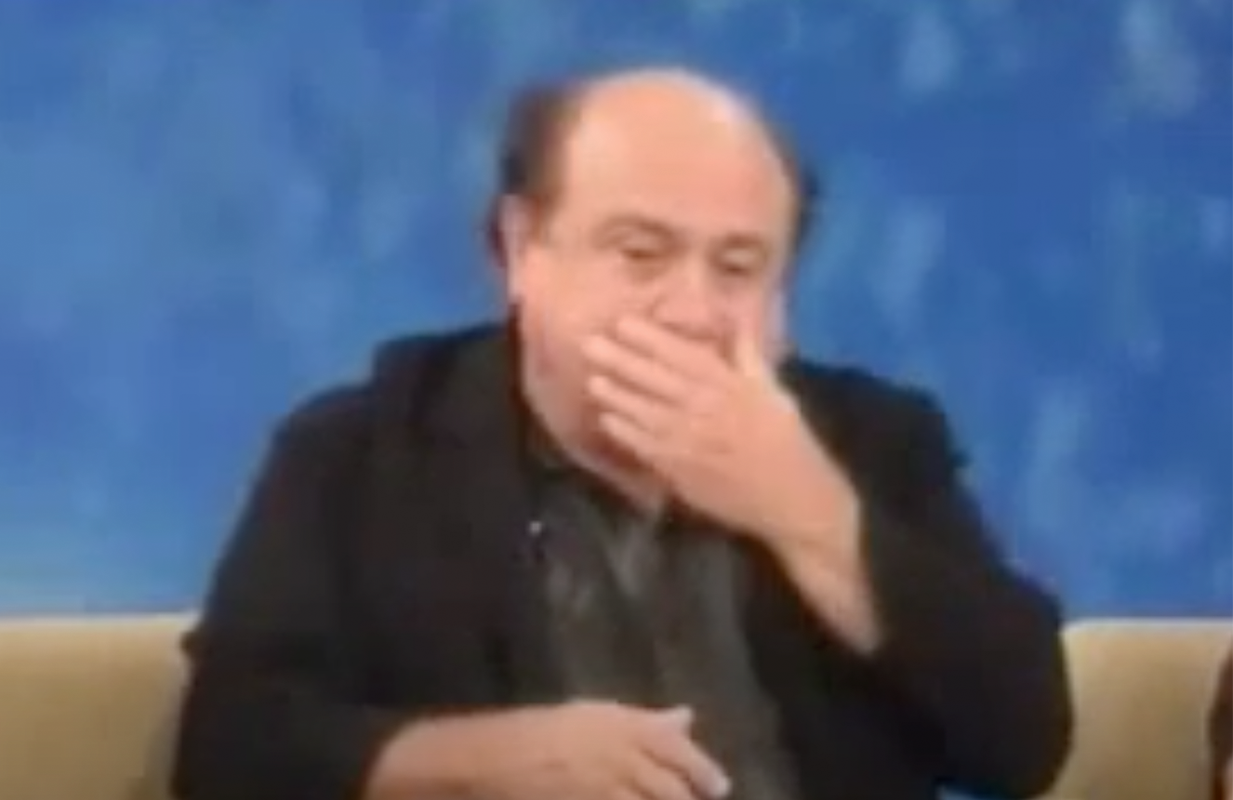 DeVito and Perlman’s wild night in the Lincoln Bedroom thus established, a somewhat-frustrated Walters asks if they can “talk about this movie,” Deck the Halls, in which he and Matthew Broderick play neighbors determined to outdo the other’s Christmas decorations. The actor takes entirely too long to explain how he usually decorates his own house and then details the premise of the movie, stopping only to throw up in his mouth. “Oh, don’t tell them the entire movie!” interrupts Behar (no mention of the potential vomit incident). “You want them to see it!”

A crushed DeVito stares off into the distance, as if someone has just told him that Santa himself was run over by a reindeer, and the co-hosts quickly apologize to their crestfallen guest. As the ladies rub his back to console him, O’Donnell leans over and grabs DeVito’s face, saying, “Come here. Sit with mommy. Come here, honey. Come sit with me.”

O’Donnell pulls DeVito into her lap as, Walters desperately scoots away, and confirms that he had fun during his five-minute appearance on the show. “Honey, read that! Read that right there!” she says, pointing off camera. DeVito is unable to see the teleprompter, and O’Donnell is forced to whisper the words into his ear as he repeats them one by one. “Deck the Halls is in theaters now,” he says, tentatively, with his arms wrapped around O’Donnell. “We’ll be right back with Thomas Gibson.”

O’Donnell plants a kiss on DeVito’s cheek and the two stare into each other’s eyes as the camera pulls away, leaving us all to wonder what we just watched.

It didn’t take long for word of DeVito’s drunken appearance on The View to hit the internet, and reports soon surfaced that the actor would say “what needed to be said privately” to Walters, as an apology. The women of The View chose to address it the following day, with Behar joking that DeVito was “drunk as a skunk,” and Hasselbeck insisting that “he was a fun drunk.”

Just a few days later, Matt Lauer asks George Clooney about the last time he got “stumble down, fall on your face drunk,” and Clooney says his night out with DeVito certainly fits the bill. “We were doing shots of limoncello and that’s all I can really say on the subject — all I can remember,” he says, adding that he had appeared on Regis & Kelly the following morning and was “pretty hungover as well.”

Clooney goes on to say that he and DeVito weren’t trying to get blackout drunk; it just happened over the course of dinner. “We were just at a restaurant. It wasn’t like we were out drinking,” he tells Lauer. “We were at a restaurant, sitting down, drinking. I was in bed by 11:30 at night and I woke up at 7:00 and I was still drunk.”

In mid-December, DeVito addressed the controversy himself for the first time in an interview with CNBC and insisting he was “joking” with his limoncello remark. “It was apparent to everybody. Actually, to most of the country it was apparent. There were a few people who thought it was scathing that I had some limoncello, but I tried to make it like a joke,” he says. “Anyway, the bottom line is that somebody said that — I sat on Rosie’s lap and blah blah blah, and I couldn’t read the thing because I had my glasses off. And then somebody just said, ‘He’s drunk.’”

DeVito later said that after his night out with Clooney, he “didn’t get to sleep until really very, very, very late,” and it affected his performance the following day. “I slept in the morning, couple of hours. I took a shower and on the show I was still bombed,” he explains in 2019. “I didn’t get much rest. They said, ‘How you doing?’ I said, ‘The last seven limoncellos got me.’ That was good.’’

While his behavior may have upset Barbara Walters, DeVito did return to The View. In 2010, he stopped by the talk show to promote It’s Always Sunny in Philadelphia Season 6 and chopped it up with the co-hosts — while wearing the same shirt he wore on that fateful day four years prior. Let’s all be grateful that vomit never made it out of his mouth.

People are talking about The View in our forums. Join the conversation.

Claire Spellberg Lustig is the TV Editor at Primetimer and a scholar of The View. Follow her on Twitter at @c_spellberg.