When Kirk Douglas played the role of the motorsport driver Gino Borgesa, in the film The Racers (1955), he entered the Motor World at a faster speed than his character in the Monte Carlo Rally. And although it is a romantic drama, it adds lovers to the Motor to take in the film, the car of the consecrated pilot Stirling Moss.

Issur Danielovitch Demsky (Kirk Douglas) was born in New York, the son of immigrant Russian Jews. His childhood was complex, his father abandoned the family (mother and 7 children, Issur the only boy) and had to work. Since elementary school, he became interested in the arts and when he was unable to enter the University, since he did not have funds, he spoke with the Dean, who admitted him as a “gardener-student”.

Called to the Army in 1941, he participated and was wounded in World War II, in 1946 he made his Hollywood debut and quickly reached the sky. He was always characterized by choosing the scripts and with whom he worked, not each of his characters. In 1960, directed by Stanley Kubrick, he made Spartacus. And that cry of “I am Spartacus” was recorded in the memory of all of us who saw the film.

Your attitude to the call Witch hunt in Hollywood, promoted by the Committee on Un-American Activities, produced him more admiration than condemnation (he was included in the blacklist), since the script of Spartacus It was from Dalton Trumbo, kicked out of the industry. Maybe that’s why he was nominated for an Oscar three times without winning it. They finally gave him an honorary Oscar.

Kirk Douglas was always very active, invested part of his fortune in charities, wrote books and even his own biography (The Ragman’s Son). And he was a lover of the automobile. In his movie The Racers (Fearless Men, in Spanish), drives the car in which he started, the famous English Formula 1 racer, Stirling Moss.

Stirling Moss was the greatest rival of Argentine five-time champion Juan Manuel Fangio. Both raced in Havana, Fangio won the Cuban GP in 1957 and Moss did so in 1960. The car with which Moss debuted at the Swiss GP in 1951, the HMW Stovebolt black, with branded motor High 4-cylinder, two-liter (2000 cc) and 4-speed, it was restored in 1955 by Tom Carstens, they put an engine Chevrolet V-8 and they painted it red. It was then brought to Hollywood to be used in the film.

The film tells how the runner Gino Borgesa (Kirk Douglas), in his practices to compete in the Monte Carlo Rally, has an accident for not running over a dog, in which his car is destroyed along with his illusion of running. And Nicole (Bella Darvi), owner of the dog, appears, who promises Gino another car. And looking for the right vehicle, love flourishes. 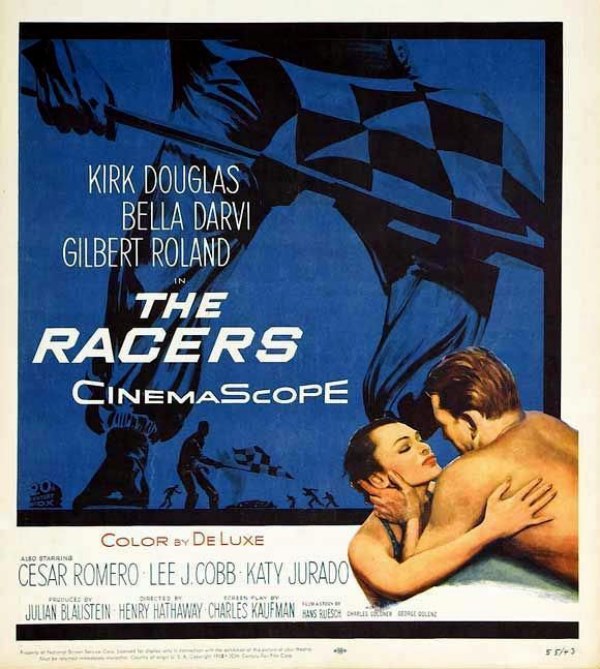 I saw again The Racers (it’s on the internet), which features other excellent figures from the cinema of that time, such as César Romero and Katy Jurado, with Latin roots. And to finish this simple tribute to the last star of old Hollywood, the “mecca of cinema” in the 50s, I invite you to enjoy one of Kirk Douglas’ 80 films. There is something for everyone.

On the front page: Kirk Diuglas in his sports Mercedes-Benz

Roll with Art. Nicolás Cage and the Ford Mustang in “60 seconds”