He is the last great Hollywood star who made an entire generation dream of his unforgettable role as Spartacus. Actor Kirk Douglas he turned 102 this Sunday of life become the only survivor of the golden age of the Mecca of cinema turned into a legend of a type of films that marked a milestone. “I did not imagine that it would exceed 100 “, confessed the mythical interpreter in an interview with The Hollywood Reporter. Despite his advanced age, Michael Douglas’s father He went out to the doors of his house in Beverly Hills, with his wife, Anne Buydens to celebrate this record birthday.

There have been many who have wanted to congratulate this unrepeatable actor, who became a trending topic on social networks for the avalanche of tributes he has received. His closest relatives have also remembered him. His daughter-in-law, Catherine Zeta-Jones, wanted to honor the great star on her social profiles with an emotional and familiar black and white video. “Happy 102nd birthday to the most wonderful man. We love you, Kirk “, has written next to the images the co-star of The Fox. Also his grandson, Dylan Michael Douglas has honored the legend of the big screen with a frame from one of his films and the following text: “Happy 102nd birthday. Although you are revered by millions of people, my love for you is by far the greatest. I love you forever and ever ”, He has written. 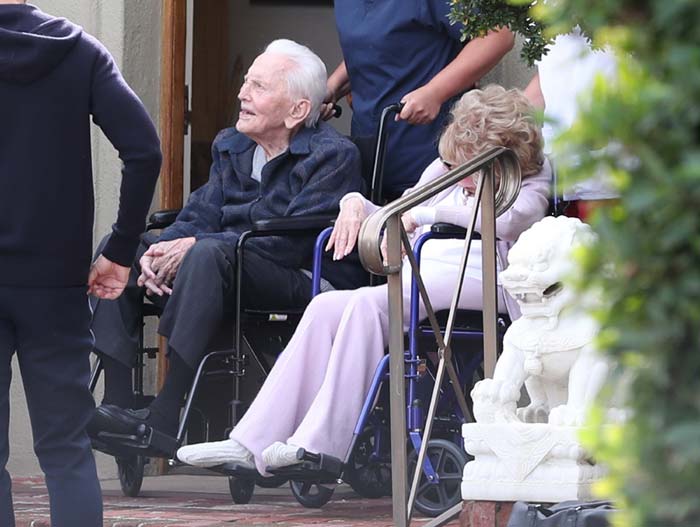 Despite having passed the centenary of life and the occasional problem, such as the stroke he suffered more than two decades ago, the artist is in good health. Kirk Douglas has an extensive filmography. He began his career in the 40s and a decade later he already became an idol of classic cinema. However, world fame and the qualification of myth came to him with his role in Spartacus, the film that Stanley Kubrick made in 1960 and which brought together an unrepeatable cast in which there were no shortage of filmmakers such as Peter Ustinov, Laurence Oliver or Tony Curtis, among others.

Although he was nominated three times for an Oscar, he never won it and It was in 1996 when he won an honorary Oscar for his 50 years of dedication to the film industry. The films in which he appears (he has worked in more than 90 films) are marked by the strength of his performances and the great charisma, which goes beyond the screen, of his characters. In addition, he received in 1981 from the hands of the President of the United States, Jimmy Carter, the Presidential Medal of Freedom for “working as an emperor of good will and sharing with other peoples his love for the cinema and for his homeland.”