The newest film from Clint Eastwood is entering the MUST-WATCH Top 10 this week! But will it take the top spot, or could that go to Michael Caine’s latest film? Perhaps a Netflix show about sex education may take that top spot? You’ll have to keep reading to find out!

Starting off with a radical new form of media!

Zero Contact is a new film starring Anthony Hopkins (from the Silence of the Lambs and the Father). He plays a tech mogul who has recently passed away, but he has one final invention that could save the world, or destroy it. This film, which was shot during the COVID-19 pandemic, focuses on the attempts of five others (including Aleks Paunovic from War of the Planet of the Apes, and Chris Brochu from Recon) to destroy this invention before it can destroy everything.

What’s very interesting about this film is that it’s coming out as an NFT! For those who don’t know, NFT stands for non-fungible token, and it’s essentially a digital item that can only be exclusively owned. It can’t be shared with others. On September 24th, bidding for owning one of several exclusive copies of this film starts on Vuele.io, an NFT content platform created by CurrencyWorks and Enderby Entertainment. The company is also running a Golden Ticket promotion, where anyone who registers on their website before September 24th is eligible to receive a Golden Ticket, which will include the films and tons of behind the scenes content! Think of this film like the first ever digital-only DVD!

Bidding starts for exclusive copies of the film on September 24th, and the film itself premieres on Vuele on October 4th!

Best Sellers stars Aubrey Plaza (from Parks and Recreation and Black Bear) as the head of a publishing boutique that’s going on the precipice of going under. With help from her assistant (played by Ellen Wong from GLOW and Scott Pilgrim vs. The World), she realizes that they still have a contract in effect with famous author Harris Shaw (played by Michael Caine from the Dark Knight trilogy, and Dressed to Kill). He’s spent years in recluse, but he owes them one more novel. She convinces him to write that last novel, and then head on a book tour to save the firm. He’s not very happy about it, and hilarity ensures as they head on the road!

You can watch this now on Apple TV+, or on your VOD service of choice now! 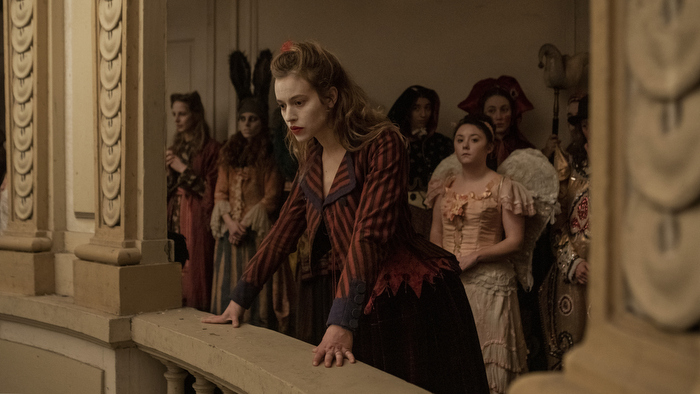 The Mad Women’s Ball is a new film directed by and starring Mélanie Laurent (from Inglorious Basterds and Enemy). It just finished playing at TIFF, and it stars Laurent as well as Lou de Laâge (from the Innocents) and Benjamin Voisin (from Summer of 85). The main character is a young free-spirited woman who is sent to a psychiatric institution by her father in the late 19th century. She claims she can speak to the dead. In the institution, she sees tons of women, most of whom aren’t crazy. But the professor leading them is more of a entertainer than a doctor, with his efforts culminating in a grand ball.

You can watch the film on Amazon Prime Video now!

The third season of Sex Education sees the return of Otis (played by Asa Butterfield from Hugo), Eric (played by Ncuti Gatwa from the Last Letter from Your Lover) and Maeve (played by Emma Mackey from the upcoming Death on the Nile). After the sex therapy clinic run at the school in part with Otis’ mother Jean (played by Gillian Anderson of the Crown and the X-Files), the students are feeling very sexually liberated, to the chagrin of the staff. This leads to the hiring of new headmistress Hope Haddon, played by Jemima Kirke (from Girls and Tiny Furniture). She promises to clean up the school, but will her attempts succeed? Or will teenage hormones flow free?

You can watch all episodes of the third season on Netflix now!

Lastly, the latest film from an elderly cinematic iconoclast!

Cry Macho is the latest film directed by and starring Clint Eastwood! The 91-year old actor is playing a former rodeo star. He’s hired by his former boss (played by Dwight Yoakam, a country musician who also appeared in Crank and Crank: High Voltage) to head down to Mexico and find his son (played by Mexican actor Eduardo Minett from La rosa de Guadalupe). Eastwood finds him participating in cockfights with his prize rooster called Macho, and starts the long journey of bringing him back to America. Together, they realize that the traditional idea of being masculine is overrated, because it makes for a toxic life.

You can watch this film in cinemas now!

8. Prisoners of the Ghostland – VOD

7. The Eyes of Tammy Faye – Cinemas

6. Shang-Chi and the Legend of the Ten Rings – Cinemas